A suicide bomber killed a Hamas guard in southern Gaza early Thursday when forces tried to stop him from infiltrating into Egypt, members of the terror organization said, in what sources described as a rare attack against the Islamist group.
“Early this morning security forces stopped two people approaching the southern border (with Egypt),” an interior ministry spokesman in the Hamas-run territory said in a statement.
“One of them blew himself up,” it added.
Later a medical source confirmed a member of Hamas had died in the attack.
The source named the man as Nidal al-Jaafari, 28.

Here is the late Mr. Jaafari. 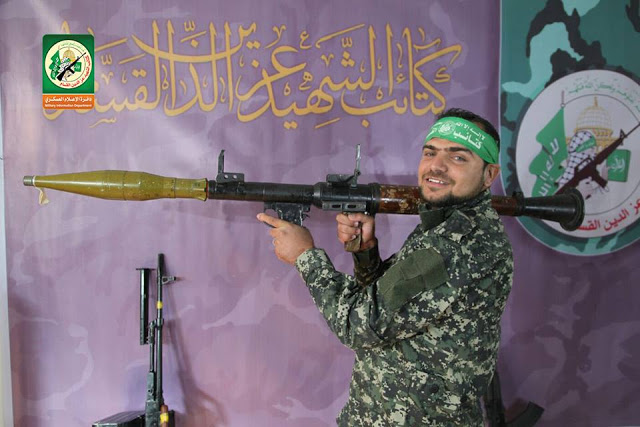 Notice that he is a member of the Al Qassam Brigades, Hamas’ “militant wing.” But he is also a guard – which means according to the Goldstone report and the PCHR, he is a civilian.

Hamas doesn’t distinguish between civilians and their “militants.” Yet the world keeps pretending that there is a distinction.

Another thing to keep in mind is that the Rafah crossing is open now for the first time in four months, as Egypt is allowing Hajj pilgrims to leave. Practically no one has been reporting on the actual siege by Egypt on Gazans for four long months – months during which Israel allowed thousands to pass through its own Erez crossing.

More interesting is the reaction of other terror groups to this suicide bombing, apparently by a Salafist.

Islamic Jihad condemned the bombing in Rafah as “outside religion, culture and morality.”

The Popular Front for the Liberation of Palestine stressed that it is “against the use of weapons, abuse and assault” describing the suicide attack as a  “dangerous violation.”

Fatah called it a “terrorist act.”