Iran’s MehrNews is pushing selling Iranian oil, under the name of another company, saying that buyers can make a nice profit and not be noticed by US sanctions authorities. 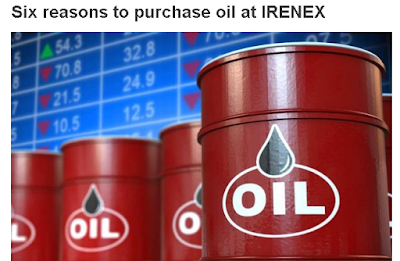 In this report, advantages of purchasing Iranian oil from IRENEX are compared with those of conducting direct negotiations with Iranian oil ministry.

At IRENEX the purchasers’ data remain confidential and they are not even introduced to the brokers’ and brokerage networks. Each purchaser is provided with a code and does the sales under it.

The prices of the offered crude oil and gas condensates at IRENEX are lower than Brent and the international market. For example, at the fifth round of oil offering at IRENEX, crude oil was offered 14 percent lower than the time international Brent prices i.e. purchasing each 35,000 barrels of crude oil from IRENEX would bring a purchaser a profit of $500,000.

Oil buyers can export the purchased cargoes to any country across the globe, except to the Zionist regime.

Oil and gas condensate are offered in 35,000-barrels cargoes at IRENEX, which are small ones and allow the private companies to take part in purchases. Presented cargoes by the oil ministry are larger and no company can participate in that market. At IRENEX, the buyers can receive their cargoes both through maritime routes from Kharg Island or via Iran’s land borders.

Iran’s oil ministry merely sells oil to known and identified purchasers or companies with good reputation and background, while at IRENEX, the only required document to enter the market is a reliable guarantee.

IRENEX can be a golden opportunity for both Iranian and foreign investors with spot or long-term agreements.

The sanctions are clearly making Iran nervous enough to set up a shell company to sell oil. The question is whether the US can find companies that try to skirt the sanctions by going through Irenex.