Claims regarding “gay rights” have acquired a prominent role in debates over Israel’s occupation of Palestine. This often takes the form of “pinkwashing,” a term denoting the use of gay rights discourse to justify the imposition of colonial rule. This article analyzes the pornographic film Men of Israel to explore how pinkwashing reflects colonialism’s depoliticizing and exclusionary logics. Men of Israel shows how pinkwashing is far more than a justificatory practice. It also legitimates, reproduces and appropriates colonial narratives to justify an alliance between supporters of gay rights and the “pro-gay” Israeli state. It simultaneously excludes a racial category of people called “Palestinians,” which includes gay Palestinians, from the rights accorded to gay men in Israel. In an era of “gay rights as human rights,” such deployments of “gay rights” highlight the necessity of directing critical scrutiny to the alliances and exclusions implicated by a particular articulation of rights.


The film’s attempt to depoliticize Israel’s territorial claims is perhaps even more important. Men of Israel reflects an important turn within contemporary colonial practices, where gay male bodies serve as markers of colonial boundaries. However, the colonial power relations implicated by the film are well disguised because, in common with other pornographic films, it elides the social and political aspects of the subjects it depicts, presenting them as “images of people without social context or relations” (Bhattacharyya 2008, 136).

Such a portrayal requires exclusion of images that might provoke questions regarding the cost of sustaining this geography. We are not shown impoverished Palestinian towns or the remnants of bombed out Palestinian homes in the wake of Israeli air raids. The film does not show bulldozed buildings and Israeli settlements built in their place or the poverty within the occupied territories, elements upon which the vibrant urban landscape of the film is constructed. Indeed, the evasion of a Palestinian presence is a key component of the film’s agenda. 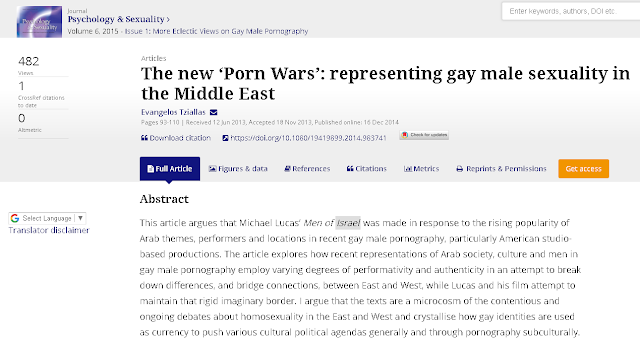 And a third academic paper from a third author, Nada Elia, also features an extended discussion of this film.