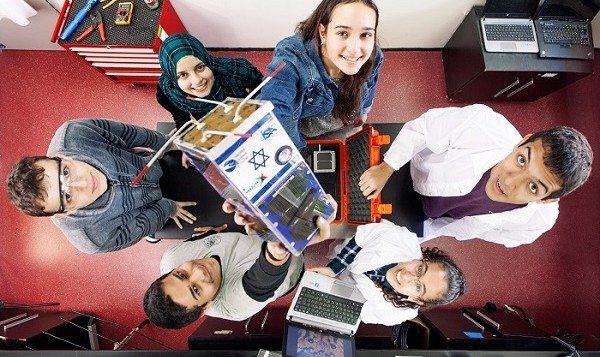 A tiny satellite built by Israeli high school students flew into space Tuesday from NASA’s Kennedy Space Center in Cape Canaveral on its way to study the atmosphere as part of an international research project.

The Duchifat-2 (Hoopoe) is one of 28 nanosatellites from 23 countries participating in the European Union’s QB50 thermosphere research program, but it’s the only one constructed by high school students.

Over 80 pupils in grades 9-12 at schools in Herzliya, Ofakim, Yeruham, the West Bank settlement of Ofra, and the Bedouin town of Hura helped to construct Duchifat-2, which weighs just 1.8 kilograms (four pounds), and is just 20 centimeters (eight inches) tall and 10 centimeters wide. Due to its small size, the satellite has no motors and instead uses the earth’s magnetic field to gently keep itself correctly aligned in space.

An Atlas V supply rocket carrying the payload of satellites along with over three tons of supplies blasted off from Florida and headed for the International Space Station, which it will reach after approximately two days of travel. Astronauts inside the orbiting space station will release Duchifat-2 and the swarm of other nanosatellites into space in about six weeks’ time.

Fourteen students from Herzliya and Hura traveled to Florida to watch the launch live.

The Israeli satellite will study the plasma density in the lower thermosphere, a layer of the atmosphere that begins at about 85 kilometers (53 miles) altitude and continues up to about 300 kilometers (185 miles).

Where else in the Middle East can Arab students have such opportunities? Specifically, where else can Arab girls work on science projects of such high caliber?

Here are the bright students, Arabs and Jews, at NASA. 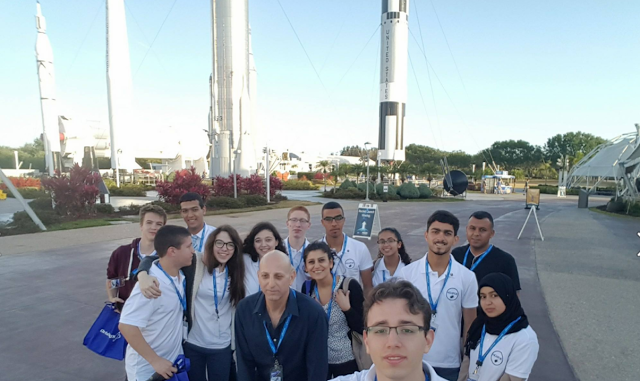