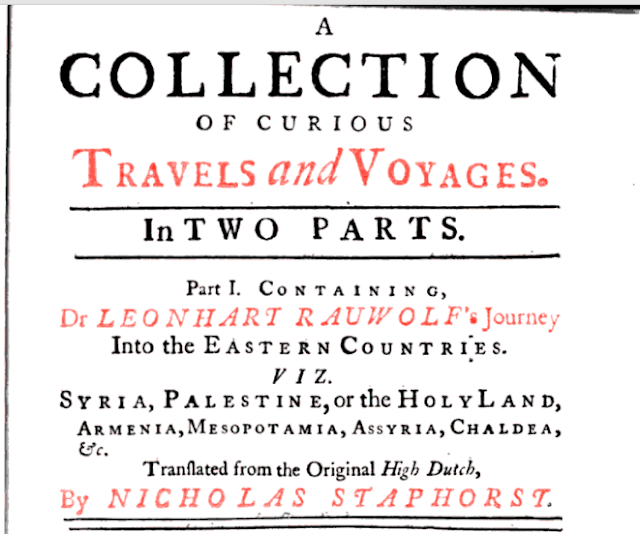 Dr. Leonhart Rauwolf traveled to the Holy Land in 1575. His description of Jaffa is most interesting: 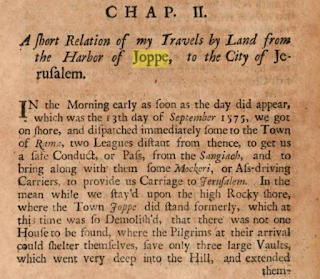 A short Relation of my Travels by Land from the Harbor of← Joppe → , to the City of Jerusalem.
IN the Morning early as soon as the day did appear, which was the 13th day of September 1575, we got on shore, and dispatched immediately some to the Town of Rama, two Leagues distant from thence, to get us a safe Conduct, or Pass, from the Sangiach, and to bring along with them some Mockeri, or Ass-driving Carriers, to provide us Carriage to Jerusalem. In the mean while we stay’d upon the high Rocky shore, where the Town ← Joppe → did stand formerly, which at this time was so Demolish’d, that there was not one House to be found, where the Pilgrims at their arrival could shelter themselves, save only three large Vaults, which went very deep into the Hill, and extended themselves towards the Sea. Into these are sometimes the Pilgrims let in, but being that at that time, a great deal of Corn was laid up there, whereunto they still daily added, on purpose to supply Constantinople during the scarcity, it was forbidden that any Body should be let in.
…
← Joppe → at that time was very well Built and Fortify’d, which doth appear, because a good many of the Jews did, at the time of the Desolation of Jerusalem, retire thither, to defend themselves against the Might of the Romans, although it was but in vain; for being that the time of the punishment, that was to befal them, was at hand, the City therefore was two several times one after another, besieged and taken, and demolish’d, and as Josephus testifieth, about 12600 Jews were killed in it. We also read, That after the time of Gotfrid de Boullion, when the Christians lost again the Land of Promise, that then this Town also was retaken again by the Infidels, and razed to the Foundations; so that now there are no Antiquities at all to be seen. And I should have doubted very much whether there did ever stand such a Town there, had not I seen some large pieces of the Ancient Town Walls still remaining, which are so near to the Sea, that there is hardly room to go at the outside of them. 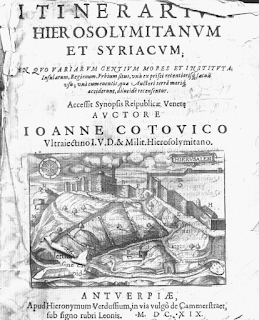 Rauwolff was not the only traveler to testify that Jaffa was empty.

Jean Cotwyk described Jaffa as a heap of ruins when he visited in 1598. (“Iaffa” is “ruinosum hodie,” meaning ruins today.

It seems that Jaffa was not the continually occupied Arab town it has been characterized as.