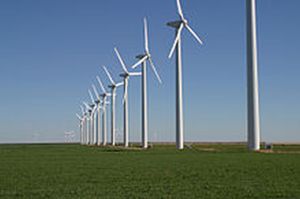 Kibbutz Zikkim, September 6 – Defense officials came to this community abutting the border with the Gaza Strip today to oversee a groundbreaking ceremony for large fans that will blow marijuana smoke onto enemy positions and compromise the opponent’s desire to fight.
More than six hundred powerful windmill-like devices will be deployed by spring 2019, according to plans unveiled today, along the security barrier that separates Israel from the Hamas-run coastal territory. Similar units are already under construction along the border with Lebanon to the north, where the Iran-backed Hezbollah terrorist organization has threatened to invade Israel, and not merely fire rockets. The fan installation marks the first of a two-phase project, the second part of which will see weed-processing units attached to the fans to feed the air stream with the smoke – smoke that contains THC, the chemical component of marijuana that has been shown to reduce aggression and make a robust military operation by the militant group less tenable.
In anticipation of another outbreak of war with Hamas – there have been three in the last ten years – Israel has taken numerous preventive steps to improve its tactical and strategic situation. The marijuana fans represent only a part of a revamped preventive strategic approach, where deterrence alone once played the most prominent role. Iron Dome protects most of the country’s population from incoming missiles, while a new underground wall aims to remove the threat of infiltration by armed militants via tunnels. Marine units have trained extensively and deployed new equipment to combat possible infiltration by sea, and the marijuana installations will ease combat conditions for the IDF if it becomes necessary to enter the Gaza Strip to neutralize further threats. The fans will operate mostly when winds are calm, to allow the smoke to spread only over enemy positions. Several local residents voiced disappointment with that policy, but acknowledged the advantages of precision targeting.
“This is a poetic moment,” declared Minister of Defense Avigdor Liberman. “THC was first isolated by Israeli scientists decades ago. Today, we combine generations of Israeli know-how and innovation in the defense of our communities from evil. I salute the engineers who made this day possible, and acknowledge the project could have reached this stage sooner if not for a persistent leak in the system that released smoke into the testing facility that for some reason the personnel there were not inclined to repair in a timely manner.”