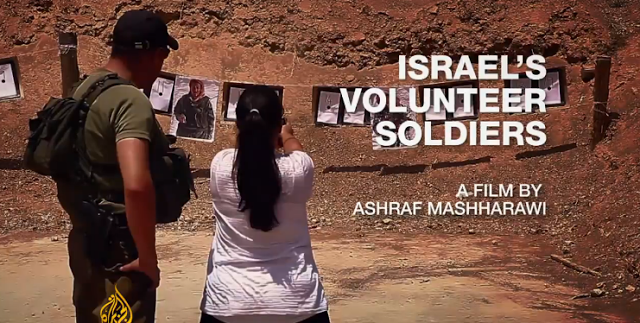 Here is how Al Jazeera starts off a news article and 45-minute film – not an op-ed – about people who volunteer to help the IDF:

In November 2013, Elena Zakusilo, a Ukrainian Jewish woman, appeared on the Ukrainian TV show “Lie Detector”, revealing that she worked for the Israeli army and continued to do so.

“The first time I killed was difficult for me. I threw the weapon and said I wasn’t going anywhere. But I went,” she said and admitted to having killed civilians, including children.

The only problem is that Zakusilo was indeed lying on the TV show.

The IDF says that Zakulsilo was a volunteer but had no rank or any of the roles she claimed – and her stories were literally unbelievable anyway, claiming that she was in charge of training dogs who would be equipped with cameras and who would be sent to attack Palestinians from ten kilometers away.. But also that she was a combat soldier who killed children in riots after Arafat died. She claimed that she reported directly to a general. Somehow she was not investigated by the IDF after killing however many children she claims to have killed and on the program she claimed to still be working for the IDF in the Ukraine protecting Israelis on airplanes.

Her story has more holes than Blackburn, Lancashire.

Yet Al Jazeera chooses to highlight her obvious lies as the anchor to the program about how nefarious it is that Israel uses volunteers in both combat and non-combat roles:


As thousands of foreign ‘lone soldiers’ are serving in the Israeli military, Al Jazeera went to find out how and why Israel encourages volunteers from the Jewish diaspora and beyond to work in its army, both as paid soldiers on the front line and volunteers in non-combat roles.
What drives foreigners to join an army which is sometimes heavily criticised for its human rights violations?

Of course every army in the world that sees combat is accused of human rights violations. And dozens of armies recruit volunteer soldiers, including Great Britain, the US, France, Spain, Denmark, the UAE, New Zealand and Serbia. No doubt many more accept non-military volunteers, like Britain’s Army Cadets.

In other words, there is nothing strange or underhanded about Israel recruiting foreigners and encouraging volunteers to help the army.

But Al Jazeera is not interested in context. It wants to paint the IDF as being particularly evil and therefore those who want to help defend the Jewish state from the enemies surrounding it are regarded as particularly immoral people.

The show is called “Israels’ Volunteer Soldiers” but a great deal of the show deals with non-military volunteers. The screenshot above shows one of the tourist shooting ranges in Israel that has nothing to do with the army.

Al Jazeera says it spent years on this report which was “triggered” by this lying Ukrainian on a game show. Yet it couldn’t be bothered to fact check the basics.

Which is why this is, in a very real sense, fake news.