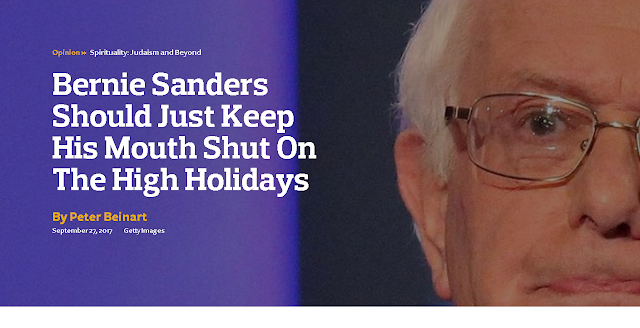 In September 2017, right after Rosh Hashanah, Peter Beinart wrote in The Forward:

Last week, Bernie Sanders gave a much-touted foreign policy speech at Westminster College in Fulton, Missouri, the same location where Winston Churchill delivered his famous “Iron Curtain” address in 1946. The contents of the speech were intriguing. So was its timing.

Sanders delivered it on the first day of Rosh Hashanah.

This has become a pattern for the Vermont Senator. In 2015, Sanders used the Jewish New Year to deliver a major address on, ironically enough, religion and public life, at Liberty University, an institution founded by Jerry Falwell. In 2016, he spent Yom Kippur at the White House meeting Pope Francis and talking about it on CNN.

It’s a pattern he’d do well to reconsider. Although he considers himself Jewish, Sanders is not, in his words, “actively involved with organized religion.” That is, of course, fine. He can observe or not observe Jewish holidays however he’d like. But he’s also a former — and likely future — contender for the presidency in a deeply religious country. And flaunting his disrespect for his own religious tradition isn’t smart.

Beinart’s concern was not for Sanders to embrace his spirituality, but to ensure he is electable:


Sanders has not called himself an atheist. His secularism, however, may hurt him with voters who espouse a specific faith. According to a January 2016 Pew Research Center survey, Democrats who identified as Protestant or Catholic were roughly 20 points less likely than religious unaffiliated Democrats to say Sanders would make a good or great president. Among the religious unaffiliated within their party, Sanders led Clinton by eight points. But among Protestants and Catholics, she led him by 23 points.

Sanders’ recent videos where he claims to be proud to be Jewish may be a direct, and somewhat cynical, attempt to gain the votes he lost to Hillary.

Bernie’s latest outreach video to Jews is more of the same – he talks a lot about Hitler’s Nazis and contemporary Nazis and that is pretty much his entire Jewish playlist.

I’m very proud to be Jewish and I look forward to becoming the first Jewish president in the history of this country. pic.twitter.com/UOPvEomHNE

There is a short clip there of Bernie lighting a menorah – but even then, in Des Moines, he couldn’t come up with a single word to relate to Chanukah itself, only speaking in platitudes about freedom and diversity. It’s a holiday that celebrates religious freedom and he couldn’t even bring himself to make the connection, something that non-Jewish presidents have done ever since they started creating greetings for Chanukah.

Maybe he can fool some people of faith in America into thinking that his talking about people who hate Jews gives him some Jewish bona fides. But the entire “proud to be Jewish” shtick, when four years ago he avoided the topic at all costs, is not seeming very authentic.

He has yet to say a single specific thing about Judaism he is proud of.

We have lots of ideas, but we need more resources to be even more effective. Please donate today to help get the message out and to help defend Israel.0