Activists from the Palestinian-led Boycott, Divestment, and Sanctions (BDS) campaign are urging a group of international chefs to cancel their participation in an Israeli culinary show they say is a “whitewash exercise”.
BDS campaigners will be conducting a twitterstorm today, calling on chefs to pull out of the event using the hashtag #ApartheidRoundTables.
Next month, head chefs of 13 famous restaurants from cities around the world “will spend a week cooking in Tel Aviv as part of a PR initiative to bring international prestige to Israel’s culinary scene.”
According to campaigners, “the Round Tables culinary show is sponsored by Israeli government ministries, the Tel Aviv Municipality and businesses operating in illegal Israeli settlements.”

The American Express Round Tables event in Tel Aviv started last year, and it was so successful (it sold out ahead of time) that it was decided to make it an annual event.

Welcome to Round Tables by American Express, an international culinary festival, which brings together the world’s best restaurants and chefs. The festival is back in November, and it’s going big:

13 of the most acclaimed restaurants in the world send their chefs to Tel Aviv for an entire week, where they will take over the kitchens of the city’s top restaurants.

Each hosting restaurant will serve a winning tasting menu, featuring the signature dishes of the guest restaurant, seasoned with a pinch of local flavors and ingredients inspired by the Israeli chef.

The result: a one-of-a-kind culinary show.

Among the restaurants and star chefs who will arrive this year – from New York, Paris, Madrid, Copenhagen, Lisbon, New Delhi, Lima, Bangkok and more – are 5 restaurants ranked in the prestigious and influential World’s 50 Best Restaurants list (actually listing 100 restaurants) and 4 Michelin stared restaurants.

The hosting restaurants in Israel – those who took on the challenge of learning and performing – are some of the leading in Israel: Taizu, Jaffa Tel Aviv, Thai House, Coffee Bar, Hotel Montefiore, The Norman, Popina, Nithan Thai, Pastel, Chloelys, The Blue Rooster, Quattro, and for those who want kosher – the wonderfully social Liliyot.

In other words, the BDSers already lost. The preparations have been going on for months, the best chefs of the world are vying to go to Tel Aviv, and it is already a smash success.

By the way, this ad for the festival was awarded one of the Best Food Ads of the Month by Ad Forum: 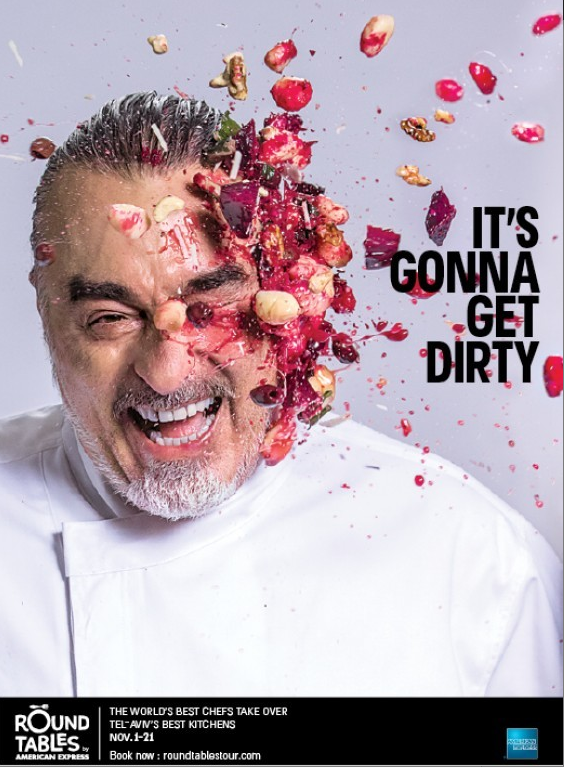