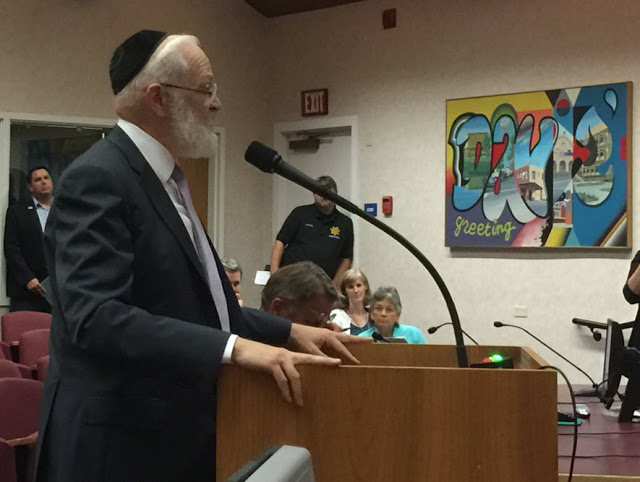 This article in the Davis (CA) Vanguard describes quite well the arguments made about Imam Ammar Shahin’s antisemitic statements last July – as well as his “apology” – at a City Council meeting last week.

Rabbi Yitzhak Haberstein, representing the Simon Wiesenthal Center, spoke on Tuesday.  He said that tomorrow night in Los Angeles they are co-hosting a dinner for the first ruler of an Arab Country who will sign a major declaration on religious tolerance and against religious extremism.

“We’re no stranger to interfaith activity,” he said.   “This city is no stranger to social justice issues.  It has a well-deserved reputation for being at the forefront of good progressivism.  That said, there is something that happened here a number of weeks ago that’s important enough for us to want to come up here and make a statement.”

He said that any other religious leader in America who would get up in front of their congregation and “label another group fifth and call for their annihilation – all hell would break loose.   There would be no easy way out.”  He said, “There has been an unfortunate kind of double standard that has come from this community.  It shouldn’t be.

“When you consider the importance of the preachings of Jihadist movement in mosques across the world, the bloody trail that it’s left behind,” he said.  “These are not influences that can be poo-pooed or simply wished away.”

The Rabbi called it “an apology that was no apology.  It did not take back the basis for the statement.  The call through religious tradition, to call, three times repeated, we ask Allah that we should be part of this in word and in deed.”

Professor Emeritus Alex Groth, a retired Political Science Professor at UC Davis and a Holocaust survivor, spoke as well.  He is a 54-year resident of the city of Davis.  He said he is one of the few former inmates of the Warsaw Ghetto.

“I have seen words of hate translated into mass murder in World War II Europe,” he said.  He said he has spoken about this subject in numerous community forums and in academic publications.  “In all of my time here in Davis, I never thought even once that a time would come, when a religious leader in our city would publicly call for the destruction of the Jews with the apparent tacit consent and approval of most if not all of his congregation.

Jonathan Zachariou, Pastor at Davis Christian Assembly for the last 26 years, said he is not looking to suppress free speech.  And he noted that the freedom of religion is mentioned before even that of speech in the First Amendment.

“I am not looking to suppress anything with regards to the freedom of religio[n], but I am here to call on this city council to formally distance themselves or to categorically say that the message that was brought by this Imam has nothing to do with the Davis community at all,” he said.

“Some Muslims will disagree with his interpretation,” he said.  “But he has credentials which he’s backing up his hate speech.”

Edward Rabin, a longtime resident of Davis, said, “I want to emphasize the enormity of what has happened in the last month or two.”  He made the point, “No anti-Semite in the history of this country has ever said anything remotely like what this Imam said twice to his congregation and then posted on the internet.”

He said not David Duke, not the KKK, not Father Caughlin or “any other of the reprehensible bigots that we’ve had to put up with.”  In fact, he made the point that even Hitler himself was not so brazen as to openly talk about such plans.

David Kadosh, Executive Director of the Zionist Organization of America in the Western Region, said it was founded by former Supreme Court Justice Luis Brandeis 120 years ago.  Much of his work has been to identify anti-Semitism in schools and university.

He said that we have seen time and again how hatred has fueled atrocities and “this evil is happening here, across the street from the university.”  He read from the sermon which called on the destruction of the Jews, one by one, and not sparing a single one.  “Notice how Imam Shahin prays for the death of Jews.  We Jews have heard this both.  The same rhetoric calling for our extermination was used by the Nazis 70 years ago.”

“Just 16 years after 9/11 we continue to hear the call and see the acts of Jihad,” she said.  “Words can kill,” she argued.  “Just imagine if ‘kill every Jew’ were replaced by kill every Muslim or kill every black.  Would we be so quiescent in talking only about hurt feelings?”

She said that, following the statement, “[t]he Imam said sorry for hurt feelings but he did not retract his radical ideology.  Did any Mosque board member or congregant denounce Shahin or walk out?  No.”

She argued, “This is not just a local issue.  The incitement to Genocide is illegal under state law.”  She asked for law enforcement to all take action.

She concluded, “The sorry is simply not enough.  I no longer feel safe in Davis.  After 18 years here, I am moving away.”

By the way, the dinner that Rabbi Haberstein referred to was for the King of Bahrain, who is now under fire for his statements at that dinner where he denounced the Arab boycott of Israel.