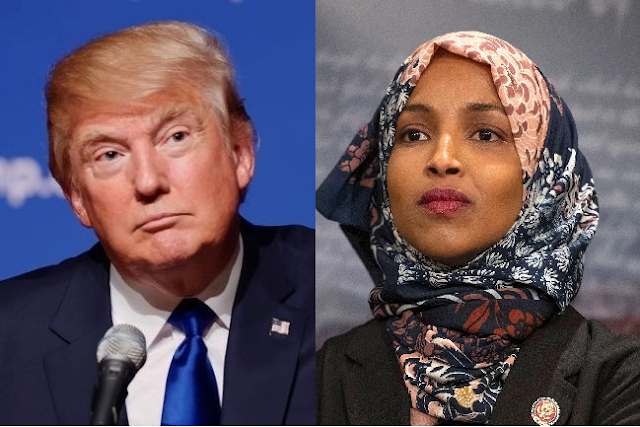 The remarks that Ilhan Omar made over the past few days – and watching how her fans in social media are responding to them – shows that she is the Donald Trump of the Left.

She’ll say something that is an obvious antisemitic dog whistle (starting with how Jews are “hypnotizing the world” and then going on to falsely claim how AIPAC, regarded as the “Jewish Lobby,” spreads money around to keep Congress in its pocket, being “all about the Benjamins.”

As with Trump, her followers and fans understand her statements exactly as the people being targeted do. They compliment her on her bravery in taking on these powerful interests. They disparage those who call her out on the dog whistles, claiming that she is only noting her displeasure at Netanyahu and Likud an the “occupation”, even though neither of those were even implied in her statements.

And then she takes the ball and runs with it, claiming the same thing.

Being opposed to Netanyahu and the occupation is not the same as being anti-Semitic. I am grateful to the many Jewish allies who have spoken out and said the same.

Her attacks were on American Jews and American supporters of Israel, not Netanyahu.

Our democracy is built on debate, Congresswoman! I should not be expected to have allegiance/pledge support to a foreign country in order to serve my country in Congress or serve on committee. The people of the 5th elected me to serve their interest. I am sure we agree on that! https://t.co/gglAS4FVJW

Who is demanding that she give allegiance to Israel? No one. But her charge that her opponents do exactly that is yet another antisemitic dog whistle. Bret Stephens called her on it, and she responded with a Trumpian tweet, claiming that she didn’t do what she so obviously did, complete with misspellings:

People do every single day, and no I haven’t attached pro-Isreal Americans. I have questioned our politics! You want to paint every word I say as such, and that’s more of your problem. https://t.co/KxhRlfYRfq

And this obvious lie:

What exactly does “I want to talk about the political influence in this country that says it is okay to push for allegiance to a foreign country” mean if not an attack on supporters of Israel that she is accusing of dual loyalty?
In one important way, Omar out-Trumps Trump. Omar uses her color and religion as both a shield and a club – claiming that she knows what discrimination is and therefore cannot be bigoted, and that those people who attack her obvious antisemitic statements are Islamophobic and racist.

It is the Trumpian skill of changing the subject taken to a new level.

As with Trump, the fires that she sets continue to burn in her wake. As with Trump, her fans run with the bigotry that were introduced into the discourse by a prominent politician, and topics that were rightly taboo because they are  racist or antisemitic suddenly become subject to debate. As with Trump, she claims innocence that her statements could ever be interpreted in a bigoted way. As with Trump, the people who call her out on her bigotry are enemies to be targeted by her fans.

As with Trump, Omar is not stupid – she cannot claim to be ignorant of what her words mean.

As with Trump, Omar using her platform to mainstream hate is wrong and irresponsible, if not downright malicious.