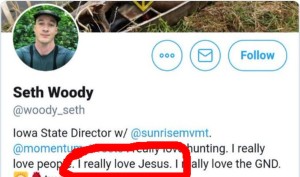 New York, January 23 – Two progressive, pro-Palestinian organizations that play up Jewish connections and names to bolster their otherwise negligible Hebraic legitimacy have launched a joint initiative to underscore the traditional bona fides they often get accused of lacking, the groups announced today, with a program that aims to train members for the title “rabbi,” the main qualification for which will be anti-Zionism. Based on the group members’ understanding that “true” Jews oppose Jewish sovereignty in the Jewish ancestral homeland, the two organizations intend to identify their rabbis as “ultra-ULTRA-Orthodox,” reflecting a level of anti-Zionism that goes even beyond that of such groups as Neturei Karta.
If Not Now and Jewish Voice for Peace unveiled a new syllabus today for members who wish to carry the religious title Rabbi, so they can wield it to fend off criticism of their manifestly anti-Jewish activities, rhetoric, and ideologies, representatives of the organizations disclosed Thursday.
According to materials distributed at a press event, the curriculum will include homiletic pointers on how to extract anti-Israel messages from facile readings of canonical texts; how to distort the plain meaning and intent of a passage to make Zionism appear evil; and how to remove context and neighboring material to prevent discovery that the source in question actually means the opposite of what the activist contends.
“We’ve struggled with Jewish authenticity issues for some time,” admitted If Not Now founder and director Seth Woody, an evangelical Christian. “At first we simply dismissed challenges to our Jewishness as pretexts for fascist Jewish supremacism, which is basically what Zionism is – just ask Linda Sarsour, for example, if you want an authentic Jewish perspective. But gradually we realized what an opportunity we had on our hands.”
“We’re used to taking terms and redefining them to suit our purposes,” he continued. “Well, we figured, why not do that to the entire institution of rabbinics? Before long, we and our Jewish allies at Jewish Voice for Peace – have I mentioned they’re Jewish? – will be ordaining rabbis of our own who can challenge the mainstream idea of who gets to interpret Jewish tradition, without the distraction of who actually has the background to do so. And we’re going to be unassailable in that, because it’ll be even more anti-Zionist than our Neturei Karta friends who visit Tehran for Holocaust denial conferences. It’ll make us more Jewish than all the Jews. Kind of like followers of Jesus.”