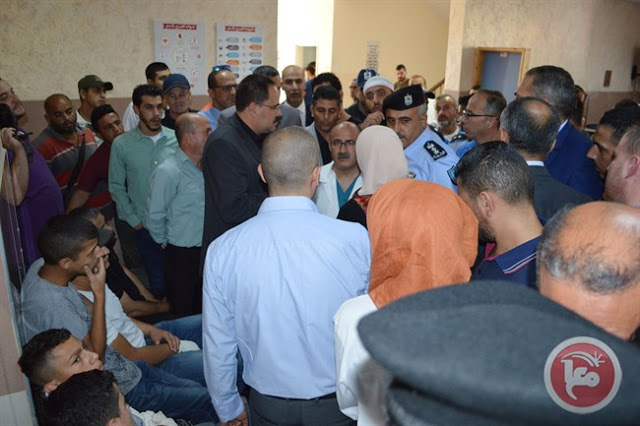 Ma’an and other Palestinian media outlets published what appeared to be a press release from the Palestinian Ministry of Education:

The Ministry of Education and Higher Education (MoEHE) condemned the attack on the Ramallah Secondary School for Boys by a group of young people who are outlawed, stressing its categorical rejection of any attack on any educational institution and the entire educational process, especially the Palestinian teacher.
The Ministry considered in a press statement today that any attack on education is an attack on Palestine, and will constitute a major issue for the ministry. The ministry will enforce the maximum punishment, follow up on the aggressors and take protective measures to ensure that this situation is not repeated.
The ministry said in a statement that the Minister of Education and Higher Education d. Sabri Sidem and Undersecretary of the Ministry d. Ozer Saleh and Governor of Ramallah and Al-Bireh d. Laila Ghannam, the police and the Directorate of Education visited the school, where they met the teaching staff and followed up the details of the event, and then went to the hospital to check on the safety of teachers and students who were injured in the attack.

So some group of people attacked a school and injured teachers and students.

But there are practically no news stories of the actual attack!

What kind of reporting is this? The type that the Palestinian Authority allows. because making its own people look irrational and violent is something that is simply not halal.

Obviously a story like this cannot be hidden as Palestinians are aware when people are injured and hospitalized. But before this press release from the Education Ministry, there was a near total news blackout on this incident.

(I did find a local Ramallah news outlet that mentioned that 7 were arrested and that the incident happened on Wednesday, when the police used pepper spray and “electric sticks” at the scene, after the General Union of Palestinian Teachers issued a press release. Still nothing about motivation.)

At first glance the Palestinian media seems to be free – Hamas media attacks Fatah, Fatah media attacks Hamas, Ma’an pretends to be independent. But in reality nothing gets reported unless the authorities allow it to be reported, and even “independent” Ma’an often publishes articles from the official Wafa news agency verbatim, without any reporting whatsoever.