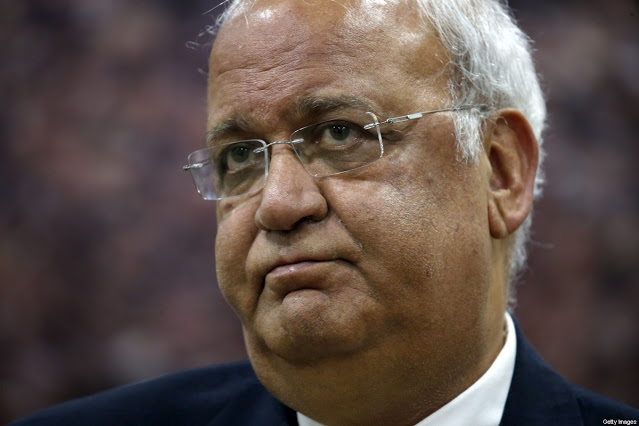 In 2010, 180,000 Palestinian patients were treated in Israeli hospitals.
But the Palestinian Authority has been reducing the number of permits of sick Palestinians to go to Israeli hospitals in recent years.
In 2017, it drastically reduced the number of Gazans given permission to travel to Israel for medical treatment.
Earlier this year, in order to fulfil a promise by Mahmoud Abbas to end all coordination with Israel, the Palestinian Authority stopped all transfers of patients to Israel – resulting in some deaths. Israeli NGOs scrambled to try to allow the most sick patients to come to Israel for treatment, while Palestinian NGOs angrily said that they would not try to help save Palestinian lives – the principle of non-cooperation was far more important than mere human life.
Well, that only applies to expendable Palestinians. But not the VIPs.
This morning, PLO Executive Committee secretary general Saeb Erakat was transferred  to Hadassah Hospital in Jerusalem to treat his worsening COVID-19 symptoms. (UPDATE: Some say he is going to Tel Aviv.)
Apparently, the PLO rules of Palestinian honor only extend to allowing normal Palestinians to die for the cause, but not highly placed PLO officials.
A government that actively works against the interests of its own people does not deserve to exist to begin with. But when it distinguishes between the masses of its people it doesn’t care about and its own top officials, it shows that it doesn’t even adhere to its own stated principles to justify treating its citizens like dirt.
Palestinians deserve better leaders than this.