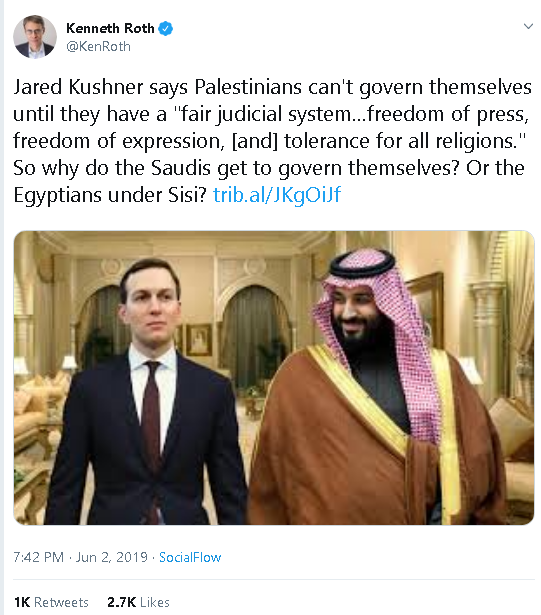 First of all, Roth is misquoting Kushner.

Kushner did not say that Palestinians cannot govern themselves but that there are severe impediments to doing so effectively before they can be truly independent. This is not a very controversial position. Why wouldn’t the world demand that a new nation can take care of the basics of human rights before being admitted to the family of nations?

Moreover, Roth does not dispute that Palestinians do not have basic human rights. He says that human rights are irrelevant to the question of their suitability to statehood!

Ken Roth – the leader of a human rights group – is defending granting statehood to a nation that he admits would not offer basic human rights to its citizens from the outset.

If anyone would want a human rights litmus test before granting nationhood, it should be Ken Roth. The fact that he says the opposite is stunning.

Would he say that about any other people who desire statehood? Would he say that ISIS deserves a state despite its human rights record? Hell, he won’t go on a limb to say that even Kurds deserve a state, even after they have proven the ability to govern themselves! But he supports the creation of a corrupt, kleptocratic Palestinian dictatorship – because that would take land away from Israeli control, and Jews building houses is far worse to him than Palestinians sentencing Arabs who sell land to Jews  to death.

His analogy to existing nations is absurd, of course: there is no comparison between nations that already exist and entities who aspire to statehood. By all means work to fix the human rights abuses everywhere, but the idea of dismantling a state because of its abuses – real or imagined – for some reason only applies to Israel.

Look at his examples of corrupt countries – Saudi Arabia and Egypt. Not Iran, not Turkey, not China with its concentration camps filled with millions of Muslims –  Roth only mentions countries that are on Israel’s side politically. Even his choice of paradigmatic nations with poor human rights records (which both undoubtedly do have) reveals Roth’s deep seated hate for Israel.

Roth’s pathological hatred of Israel prompts him to take positions that are diametrically opposed to human rights. Which disqualifies him from his job.