This tweet from Ken Roth of Human Rights Watch shows, yet again, that his bias against Israel is pathological. 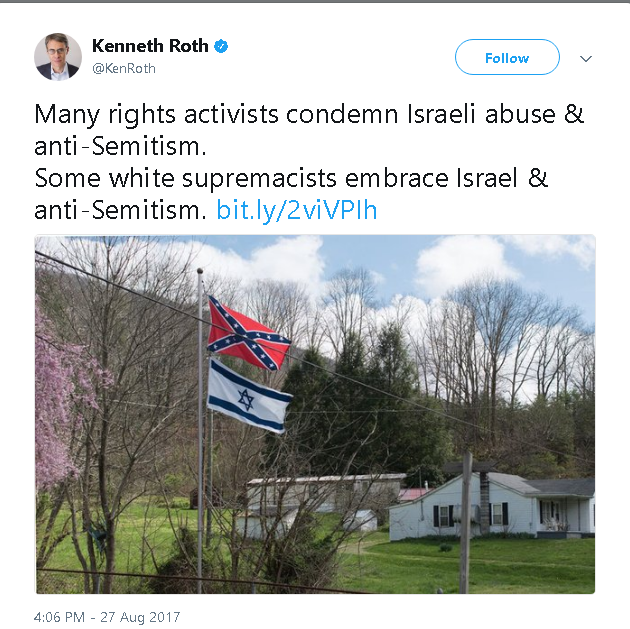 Yes, Ken Roth has embraced the latest and wholly fallacious anti-Israel trend: to conflate Israel with white supremacists because the bigots claim to be Zionist.

Not because Israel embraces the bigots, but because the bigots pretend to embrace Israel.

I’ve shown how absurd these arguments are before and have shown that the exact same logic damns the “progressives” far more than Zionists because neo-Nazis love to quote the anti-Israel articles written by the supposedly liberal progressives.

The neo-Nazis know Jew-hatred when they read it, and the neo-Nazi Stormfront site has quoted both Mondoweiss and Electronic Intifada over 100 times each, Ali Abunimah himself over 35  times, and Max Blumenthal over 80 times.  Today’s Nazis aren’t approvingly quoting Naftali Bennett or Binyamin Netanyahu – they are quoting the people that Ken Roth links to on his Twitter feed.

In fact, Stormfront also quotes Human Rights Watch for fuel for its anti-Israel articles. Stormfront was just taken down, but Google cache shows several of the articles:

This article at Stormfront that quotes Ken Roth and HRW has a headline that would be right at home at “progressive” websites that HRW employees write for.

Which means, according to this logic, that HRW is a Nazi-sympathizing organization.

But Ken Roth isn’t going to tweet “Many neo-Nazis embrace @HRW research against Israel.”  Because he is interested in his anti-Israel narrative, not the truth.

Even worse is that Roth has ignored that Arabs have embraced actual Nazi ideology. The Protocols of the Elders of Zion and Nazi propaganda in Arabic is still sold at Arab book fairs, the blood libel is still mentioned in mainstream Arab newspapers, and the amount of blatant antisemitism in Palestinian media fills up the Palestinian Media Watch and MEMRI websites.

But Ken Roth isn’t going to equate Arabs with the Nazis that they openly have admired at the highest levels. He only wants to equate Israelis with racism and bigotry, not Arabs who practice those very attributes every day, publicly, in their own media and public statements.

Once again, Ken Roth of Human Rights Watch shows that he is beneath contempt.

The article he links to, by Nada Elia, states the equivalence of Zionism and fascism as a flat truth. But she accidentally reveals her real agenda item in this one sentence:


If we are to gain anything from this critical moment, we absolutely must seize the opportunity offered us by white supremacists to foreground the similarities between fascism and Zionism.

Nada Elia is acting just like the white supremacists are. And Ken Roth approves.

(By the way, Elia’s Twitter handle is @NadaBDS. How twisted must one be to choose to dedicate one’s entire online presence towards hating Israel? That’s who Ken Roth chooses to feature.)