A warning by the Arab guerrilla organization El Fatah that Christmas tourists would not be safe in the Holy Land led the Israeli government to station 950 security police in Jerusalem and Bethlehem and to set up roadblocks in the area. 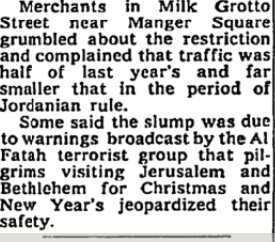 Also from the NYT on that same date: 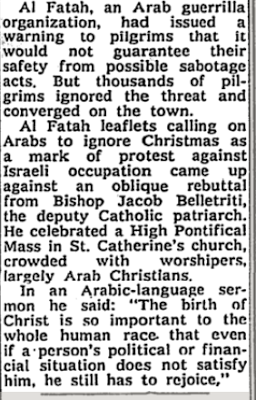 Fatah, the dominant party in the PLO, explicitly warned and threatened Christian tourists in 1967 and 1968. And Christian leaders, under Israeli rule, were confident enough to tell the world to ignore the terrorists and come anyway, even though some were scared off. And Israel took drastic steps to reduce the chance of terror attacks by banning non-Christians from Bethlehem.

This month, virtually the same thing happened. Fatah, led by Mahmoud Abbas, and other Palestinian groups warned of “days of rage” in Israel. However, Christians under Palestinian rule – who have been fleeing their homes in droves since the Palestinian Authority was established, under Muslim threats to them – are too frightened to blame their Muslim-dominated government, so they blame Israel and Trump.

And credulous reporters believe them:

A week before Christmas, there were only a handful of tourists snapping photos of the huge decorated tree in Manger Square, with its strings of red and white lights. The large plaza in front of the Church of the Nativity was nearly empty except for a handful of visiting clergy.

Chalk the absence of visitors up to President Trump’s Jerusalem speech, which outraged Muslims, scared off tourists, and unnerved Christian clerics.  It also bushwhacked  Vice President Pence’s planned (now postponed) trip to Jerusalem, Bethlehem, and Cairo, which was meant to express solidarity with Mideast Christians. Church leaders were refusing to meet him.
…

For starters, the president’s move wrecked a pre-Christmas tourist season that is especially important to Palestinian Christians.

“Before the Trump statement, we thought this would be the best year in the past 10 years for tourism,” I was told by Maher Canawati, who, with his father, Nicola, owns the legendary Three Arches gift shops in Bethlehem, specializing in mother of pearl and carved olive wood objects. Living in Bethlehem since the early 17th  century, the family has managed to navigate political challenges over time;  portraits of ancestors look down on Canawati, including one of his father posing with a Bethlehem Boy Scout troop,

“The city has 50 hotels, 20 built in the last four years,” says Canawati. “Everyone thought things would be better. But now there have been many cancellations after the statement.” Bethlehem’s economy is at stake.

Trump’s statement didn’t scare off tourists.Palestinian threats – from the exact same Fatah that threatened tourists in the 1960s, as well as from a host of other Palestinian terror groups – is what is scaring off tourists.

Palestinian Christians, scared as hell of their tenuous position under Arab rule, have learned that breaking ranks with the Muslim majority can be deadly. So they know exactly what to say to reporters when they are on the record.

Off the record, though, Palestinian Christians admit their fears, they talk about their persecution, and they are voting with their feet by relocating anywhere they can outside the Arab world.

As I quoted an article by Standpoint in 2014:

While Bethlehem remains the most populous Christian city in the West Bank, its Christian population, as in the West Bank generally, is shrinking dramatically. Only 50 years ago, Christians constituted 70 per cent of Bethlehem’s population. Today they make up just 15 per cent. Christians number approximately 38,000 people in the West Bank, representing 2 per cent of the population.
“We used to be many. Now there are so few of us left. Everyone is trying to leave,” says Samir, another salesman in a neighbouring shop selling Orthodox icons. Worrying about the consequences of complaining about the situation, Samir declined to use his real name.
“My mother doesn’t like to walk in the street at night because her hair is uncovered, and people come up behind her and make rude comments,” he tells me. During Christmas celebrations last December, women in their twenties on a visit from London with their parents and siblings complained of being harassed by a gang of male youths as they stood watching a festive performance in Manger Square. The gang did not desist until some local women came to stand nearby and told the boys to stop.
Everyone agrees that economic hardship and the low birthrate of the Christian community are the primary causes for decline. Yet in recent years Christians in Bethlehem also complain of a growing climate of intimidation from Islamic extremists.

And it is the exact same Fatah that threatens Christian tourists, while claiming to represent them.

UPDATE: As of December 20, Israel expected more Christian tourists this year than last. The entire premise of the article seems to be mistaken.