In the spring of 1956, a Jewish girl named Deborah Rabinowitz from Queens saw a TV show about how poor Arabs are. Touched by their plight, she sent $2 to to Egyptian leader Gamal Abdel Nasser that she saved to buy her sister a Passover present, along with this letter: 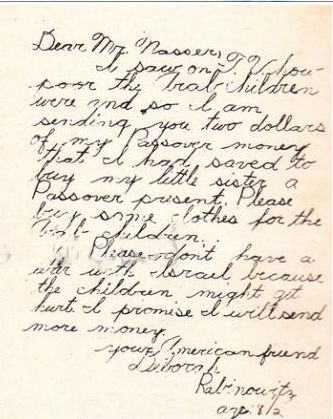 Dear Mr. Nasser,
I saw on T.V. how poor the Arab children were and so I am sending you two dollars of my Passover money that I had saved to buy my little sister a Passover present. Please buy some clothes for the Arab children.
Please don’t have a war with Israel because the children might get hurt. I promise I will send more money.
Your American friend,
Deborah Rabinowitz
age 8 1/2 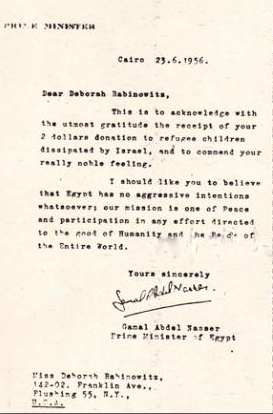 This is to acknowledge with the utmost gratitude the receipt of your 2 dollars donation to refugee children dissipated by Israel, and to commend your really noble feeling.

I should like you to believe that Egypt has no aggressive intentions whatsoever; our mission is one of Peace and participation in any effort directed to the good of Humanity and the Peace of the Entire World.

Three days later, on June 26, Nasser seized control of the Suez Canal and blocked all Israeli ships from using it, lighting the spark that led to the 1956 war.

Note that Deborah’s letter didn’t specify the poor Arabs she was referring to, it is not so clear that the TV report was about refugees from the 1948 war, as Nasser responded. So even Nasser’s letter to an eight year old Jewish girl included anti-Israel propaganda.

Egypt had banned all refugees from living in its borders and shunted them all to Gaza, making it a true open-air prison. It used Gaza as a staging area for fedayeen attacks against Israel throughout the 1950s. That $2 did not help anyone but Nasser.

Notice also that Nasser didn’t refer to those refugees as “Palestinians.”

Hopefully Deborah Rabinowitz grew out of the mentality that antisemitic and anti-Israel leaders would turn peaceful if only we send them more money and tell them how sympathetic we are. Today, too many Westerners, including too many American Jews still think with the exact same logic and naivete of an 8 1/2-year old girl.