The New York Times featured a letter from a (Rabbi) Mordecai Schreiber, of Fort Lauderdale, Florida:

As an Israeli and an American, I am appalled by the re-election of an Israeli prime minister who blocks the road to peace with the Arab world, and by the current political culture in the United States, which has turned this country into George Orwell’s “Big Brother” nightmare in which lies are truth and war is peace.
I used to be very proud of both countries. I no longer am.

Schreiber was born in Haifa and became a Reform rabbi at Hebrew Union College in 1965. He’s written numerous books and articles.

And yet he seems somehow unaware of the amazing things Benjamin Netanyahu has done to bring Israel and the Arab world closer than they have ever been.

Before Netanyahu, the idea of multiple government ministers visiting the UAE or hearing Hatikva play in that country was fantasy. 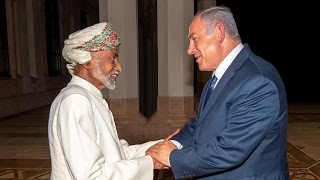 The idea of a state visit by the Israeli prime minister to Oman was equally unthinkable.

Israel and Morocco trade keeps increasing, to $37 million in 2017 alone, while Israeli company Netafim opened up a subsidiary in Morocco.

Either Rabbi Schreiber is unaware of all of this happening under Netanyahu’s tenure as prime minister – or his idea of what peace between Israel and the Arab world should look like is twisted.

Too many American Jews are brainwashed by the idea that the only road to peace between Israel and its neighbors is a Palestinian state. In fact, the facts prove the opposite – when Israel gives more and more concessions to Palestinians, the more they demand and inflame the Arab world to be on their side.

Similarly, when Israel acts like a strong, sovereign nation, the Arab world respects it and wants to partner with it. The much derided nationalism that causes such fear in certain quarters is regarded as a positive in the region Israel finds itself in.

It is hardly a coincidence that the worst terror spree in Israeli history happened immediately following Palestinian rejection of a peace plan – a peace plan that was pushed not by Donald Trump but by a popular Democratic, president to be as fair and realistic as possible. Clinton knows the reason the Palestinians don’t have a state, and it isn’t because of Israel.

People like Schreiber seem to believe that the intifada is proof not of Palestinian rejectionism but of Israel not giving them enough. This is a very sick mentality. And it is one that J-Street and US media continue to push today.

Does the J-Street type crowd really want peace? Their silence over Israel’s and Netanyahu’s incredible accomplishments with the Arab and Muslim world indicates that they are not the ones who seek peace at all. They are so wedded to the discredited idea that the only path to peace is through a dysfunctional and terror-worshiping Palestinian leadership that they willfully blind to Israel’s repeated attempts at achieving peace.

Including being blind to a peace framework that Netanyahu himself supported and that Palestinians rejected.

Perhaps Rabbi Schreiber will realize one day that Israel isn’t the obstacle to peace – its “peace partner” is.