The british Library has digitized about half of its amazing collection of Jewish manuscripts.

The commentary on this page in the Miscellany section, which is a Hebrew depiction of the secular calendar with Christian holidays noted, is simply fascinating: 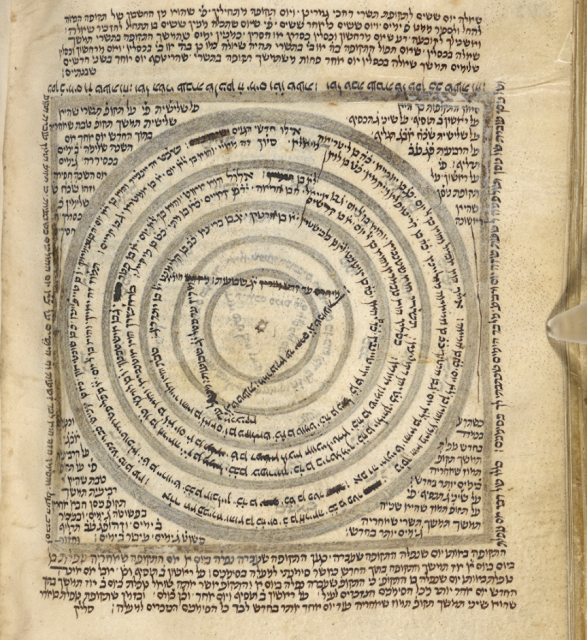 Christian calendars in Hebrew are not unique. They are found in a few medieval Hebrew manuscripts from 14th-16th-century CE Germany, France and Provence, but the Northern French Hebrew Miscellany is the earliest that is known. Its design is highly unusual as it is laid out in the centre of the page in the intriguing shape of a spiral. The calendar provides a selection of Christian Saint days for every month of the Julian year.[1] The months are given their French name (in Hebrew writing) as well as a Hebrew equivalent. For example, January is identified with the Hebrew month Shevat. We are told it has 31 days, before its Saint days are listed. However, the Jewish authorship of this Christian calendar is never lost on the reader. The names of Saints are often negatively distorted and the title of Saint (in Hebrew qadosh, meaning holy) is hardly ever used, no doubt a deliberate omission.
Critical language exists throughout this calendar. It begins with the title: ‘The months of the non-Jews and their abominations’. The first Saint Day that is listed for January, St Simeon (of the Stylites), is rendered not as Shimon (the Hebrew equivalent name) but as Ṣimaon, which in Hebrew means ‘thirst’. The days of St Mary appear at several points in the year. For example, the Purification of Mary on 2 February, under the name of ḥariah, a distortion of Mariah, which sounds like the Hebrew for excrement. The days of St Peter, for example St Peter’s Chair on 22 February and St Peter and Paul on 29 June, are regularly given as Peṭer ḥamor. The latter means donkey, which is not merely intended as an insult, but as a clever pun on the Biblical Hebrew phrase for first born ass (Exodus 13:13). St John the Baptist, whose birthday is on 24 June, is depicted as Yaḥoram, ‘may he be destroyed’, from Exodus 22:19. It is a distortion of the Hebrew name Yoḥanan, the Hebrew equivalent of John.
All these derogatory names and words have been blackened out in the manuscript, presumably by one of its later Christian owners. But they are still legible behind the ink. The distortion of the names of Christian Saints and feasts was common practice among medieval Jews, and the scribe of this manuscript was most probably following common usage. This usage undoubtedly reveals deep-seated anti-Christian feelings. But its intention was to neutralise the religious significance of Saint Days and feasts, and to avoid the use of what medieval Jews considered to be idolatrous names, whose utterance is forbidden in Exodus 23:13.

There is a lot of great stuff at that site.