As long as the Brazilian cartoonist Carlos Latuff focused on bashing Israel, his fans could see nothing wrong with his participation in the “International Holocaust Cartoon Competition” organized by an Iranian newspaper in 2006. Latuff won the second prize with one of the countless images he produced on the antisemitic theme presenting Israel as today’s Nazi Germany, while the Palestinians appear as victims suffering like the Jews under the Nazis.
But the down-with-Israel camp that never had a problem with antisemitism masquerading as anti-Zionism is no longer one big happy family united in hate for the world’s only Jewish state. The horrors committed in Syria by Assad and his allies Iran and Russia have convinced some people that Assad’s ardent hatred of Israel isn’t quite enough to embrace him – though there are still many veteran Israel-haters like Max Blumenthal and his ilk who remain ardent defenders of Assad’s regime.
I wrote already in fall 2016 about the backlashagainst Blumenthal’s determined efforts to make butcher Assad and his allies look good; at around the same time, Blumenthal’s good friend and fellow-Israel-hater Rania Khalek also lostsome of her erstwhile fans over her eagerness to embark on a career as an Assad apologist.
Now it seems that Holocaust cartoon competition winner Carlos Latuff has managed to alienate a few of his fans with a cartoon that smearsSyria’s famous White Helmets – a volunteer rescue group that tries to help civilian war victims – as Islamist terrorists. 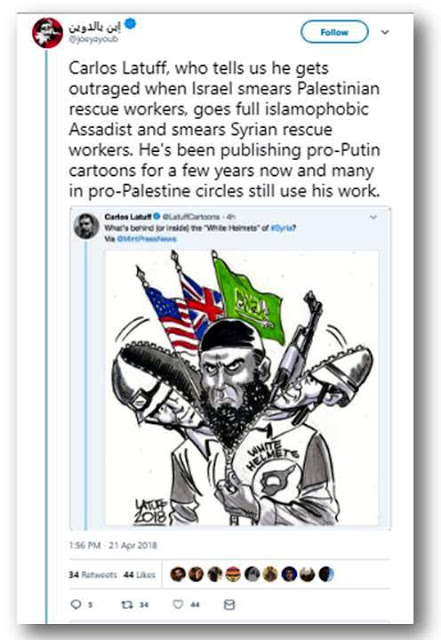 And just like with Max Blumenthal, erstwhile fans of Latuff are now disappointedthat he “even glorified the Russian invasion and bombing of Syrian civilians as some fight against terrorism and imperialism.” 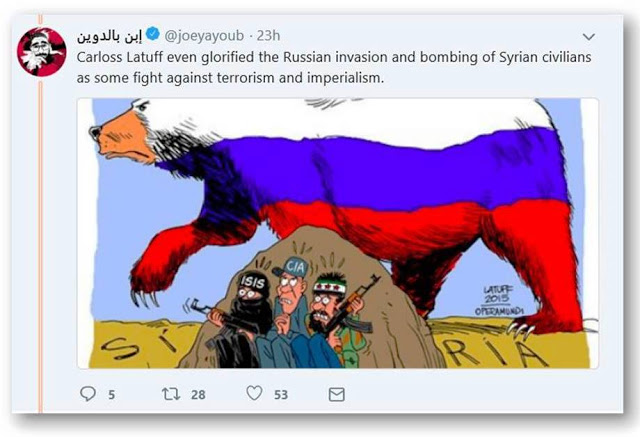 It’s welcome news that more people seem to realize that “Carlos Latuff is a fascist and a smear merchant. He is motivated by hate and resentment. He has no regard for truth or justice. If you use his crude and racist cartoons, you do your cause a great disservice.”
Arguably though, it’s a bit late to come to this conclusion more than ten years after Latuff got a prize at Iran’s “International Holocaust Cartoon Competition.”
And in any case, it seems that most so-called “pro-Palestinian” activists remain ardent fans of Latuff’s vile output.
The notorious “hate site” Mondoweiss featureshis cartoons regularly; one good example of Latuff’s  endless recycling of the antisemitic meme presenting Israel as today’s Nazi Germany and the Palestinians as the Jews of Europe in the 1930s and 1940s is a cartoon Mondoweiss publishedlast October “to celebrate the IDF’s 70th birthday.” 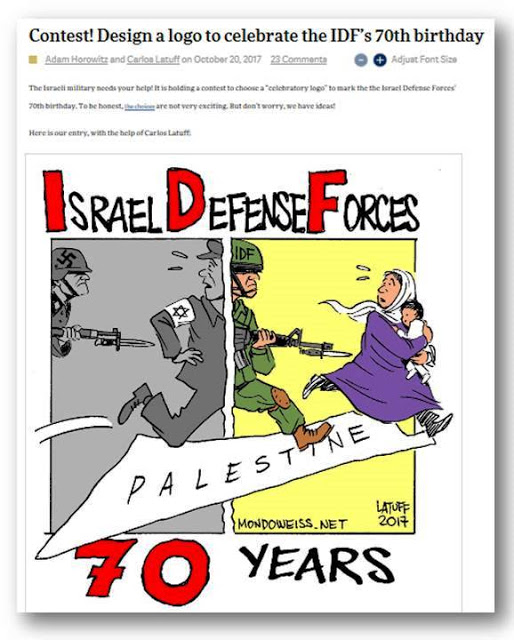 Here are some additional examples of Latuff’s largely undiminished popularity among those who think the slaughter that has been going on in Syria for years should not distract anyone from the urgent task of demonizing the world’s only Jewish state. 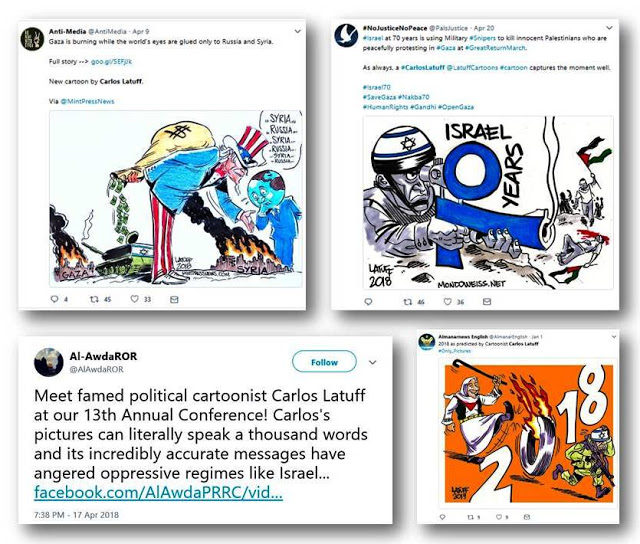