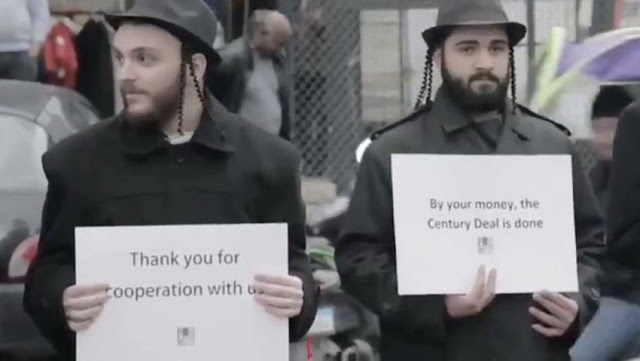 In a bizarre antisemitic publicity stunt, pro-Hezbollah Shiites dressed up as Orthodox Jews and went to the center of Beirut holding signs demanding a boycott of US products – with some signs sarcastically thanking Lebanese for helping fund the IDF.

The tolerant, cosmopolitan Lebanese responded by assaulting the “Jews.”

From The New Arab:

A group of Hezbollah supporters dressed as Orthodox Jews staged a demonstration in Beirut on Wednesday calling for the boycott of US products in response to Donald Trump’s Middle East peace plan.

In a video shared online by supporters of the powerful Shia group, participants can be seen holding signs reading “Your money can boycott the deal of the century” and “Thank you IDF [Israeli Defence Force] for your support”.

The demonstrators, dressed all in black with fake sidelocks  – traditionally grown by Orthodox Jewish men – walk through the streets of Beirut to a dramatic soundtrack as onlookers observe the protest.

Other signs read “Boycott US products until they are gone”, while the protesters also carried slogans written in Hebrew.

The video was widely decried online as anti-semitic and ridiculed for its poor production value.

Members of the group were reportedly assaulted following the demonstration after being mistaken for Orthodox Jews, social media users said.

On Sunday, Hezbollah leader Hassan Nasrallah called for all Muslims to boycott US products, prompting responses like this:

Hassan Nasrallah: “I call on the Lebanese to boycott American products.”
His son, Jawad Nasrallah: I’m not taking off my Timberland USA hoodie, dad. 🙄👇#لبنان_ينتفض pic.twitter.com/sD1LMnogx6