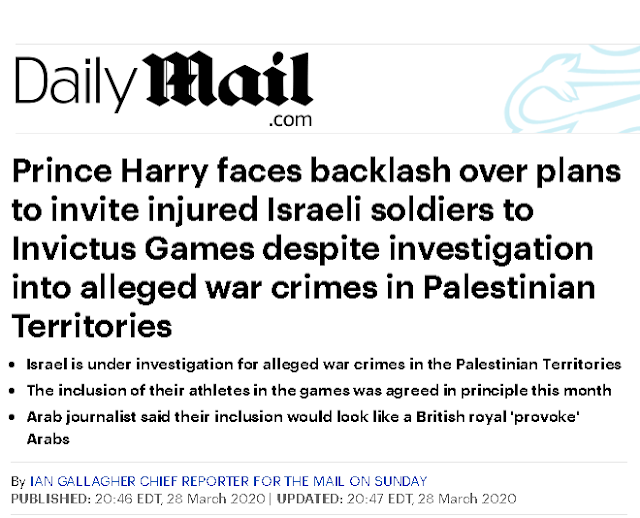 The Daily Mail has a textbook case of media bias. In an article this morning by Ian Gallagher, chief reporter of the newspaper, it says:

Prince Harry faces a backlash over controversial plans to invite injured Israeli soldiers to compete at his Invictus Games.

Israel is under investigation for alleged war crimes in the Palestinian Territories and has never previously been involved in the tournament, but The Mail on Sunday understands that its inclusion in the 2022 Games was agreed in principle earlier this month. Last night, an Arab commentator said the move would be seen as ‘provocative’.

Launched in 2014, the Invictus Games for wounded or sick military personnel and veterans, are close to the Duke’s heart. This year’s competition was postponed earlier this month due to the coronavirus outbreak. It will now be held in 2022 in Germany.

Abdel Bari Atwan, a prominent Arab journalist in the UK, said: ‘It will be seen as a way of provoking Arabs by a British Royal.’ Two Arab countries, Jordan and Iraq, took part in the 2018 Games in Sydney. Both are due to compete in the next tournament.

This supposed “backlash” is from a single terror-supporting journalist.

Abdel Bari Atwan found a silver lining in the 9/11 attacks five years after , saying “The events of 11 September will be remembered as the end of the US empire. This is because all empires collapse when they pursue the arrogance of power.”

He enthusiastically supported the murder of Jewish religious students in the Mercaz Harav massacre, saying it was “justified” and that celebrations in Gaza following the attack symbolized “the courage of the Palestinian nation.” That is pure antisemitism.

He said  “Jihad must be directed, first and foremost, against the Israeli enemy…All our guns must be turned toward that enemy, regardless of our differences, because this is the only thing that unites us”. Atwan also declared that “Arabs who do not think that Israel is an enemy are neither Arabs nor Muslims.”

So much for the value of Abdel Bari Atwan’s opinion about Israel. The only question is why the Daily Mail is promoting him as a sober representative of British Islam instead of the rabid, hateful antisemitic Israel hater he is.

But this is only the beginning of the Daily Mail’s and Gallagher’s bias. To buttress the non-existent point of an “Arab backlash,” the subhead of the article headline and subhead says “Israel is under investigation for alleged war crimes in the Palestinian Territories.”

Atwan did not say a word about this. This is wholly the Daily Mail’s addition to the story.

Why is the Daily Mail so concerned over Israel’s alleged war crimes and not those of the other participants – including the UK itself, which has also been accused of war crimes in Iraq and Afghanistan? Other participants do not exactly have a stellar human rights record.

But only Israel’s is considered disqualifying to the Daily Mail.

Beyond this, the Daily Mail tried a third avenue to smear Israel to justify a story that isn’t a story. In paragraphs 2 and 3:

Financial backing for an Israeli team has already been sought from global charity Genesis Philanthropy Group (GPG), which was co-founded by London-based Russian oligarch Mikhail Fridman.

Mr Fridman was named in former MI6 officer Christopher Steele’s dossier alleging Kremlin links to US President Donald Trump and the billionaire last year appeared in a Spanish court accused of corruption and helping to orchestrate the bankruptcy of a technology firm. He denied the charges.

GPG is a charity that strengthens Judaism among Russian Jews, supports UK Jewish institutions and fosters ties between Israeli and diaspora Jews. I can find no meaningful criticism of the organization anywhere, it appears to do stellar work. To try to smear Israel the Daily Mail is drawing a very tenuous link between unfounded allegations against one of GPG’s founders and the Israeli team which probably seeks sponsors from a wide variety of Jewish and Zionist organizations. There is nothing the east bit immoral about looking for sponsors from GPG, and insinuating that it is wrong is simply a slander.

In short, there is no controversy whatsoever about Israel participating in the Invictus Games, but for some reason the Daily Mail has decided to manufacture one. In doing so, it has only proven that it is willing to create an anti-Israel smear based on literally nothing.

This is not journalism.