A lot of reports about the Pittsburgh massacre are noting that the ADL reported an increase in antisemitic incidents of 57% in 2017 compared to 2016.

Josh Nathan-Kazis, a Forward writer, suggests that these dramatic numbers are overstated in terms of how dramatic they sound. Here is his Twitter thread.

I’m seeing a lot of folks using the ADL’s figure of a 57% rise in anti-Semitic incidents in 2017 to frame the Pittsburgh massacre.
I’ve noted on here in the past that that 57% figure can be misunderstood.

For one, much of the increase in the ADL’s figures is due to the actions of one lone Israeli teenager.

To my eye, this is the most important paragraph of the ADL report on anti-Semitic incidents that’s been so widely cited this week.

I’ve also written here that the ADL’s count of anti-Semitic incidents includes individual instances of elementary school bullying, which is useful to know when thinking about what these numbers mean.

The 57% number seems to provide hard data to back up this feeling that anti-Semitism is rising in the U.S. But the differences the ADL actually measured seem really easy to overstate.

A difference of a hundred or so anti-Semitic emails or instances of small-scale vandalism that happen to come to the attention of the ADL in a country the size of the U.S. doesn’t seem very meaningful to me.

Saying that yesterday’s massacre happened amid a 57% rise in anti-Semitic incidents paints a really dramatic picture of rising peril faced by Jews in the U.S., and I’m not sure it’s a picture the ADL study can necessarily support.

Nathan-Kazis is cherry picking his statistics to make the ADL report seem like it is overstuffed with the false Jewish community center threats and minor cases of harassment, making the 57% figure exaggerated.

He is getting it exactly wrong.

The difference between the ADL report and the FBI Hate Crimes statistics is that the FBI only includes actual crimes, while the ADL counts “incidents” which is a much broader category.

The FBI 2017 Hate Crimes report has not yet been released, so we cannot know the new numbers, but when you include only crimes in the ADL report, things are much worse than they were in 2016.

Here’s where the 57% number comes from, and the breakdown into types of incidents. 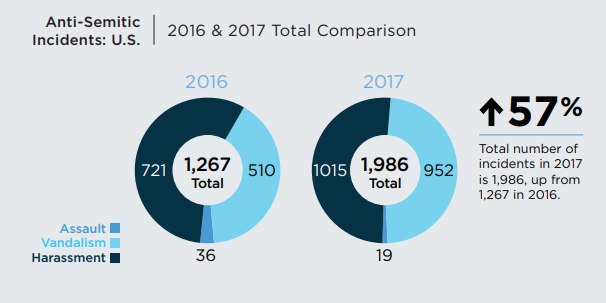 Assault and vandalism are definitely hate crimes, while harassment (which the hoax threats fall under) may or may not be hate crimes.

If we exclude the harassment category, the number of hate crimes that the ADL reports soared from 546 to 971, an increase of 78%, significantly more than the 57% being reported!

Nathan-Kazis is far more guilty of choosing which statistics to highlight than the ADL is. He is trying to downplay the very statistics that show the opposite of what he is implying.

The cynic in me thinks that Nathan-Kazis is upset over not noticing that – because if he did he could have written an article blaming Trump for the huge leap in antisemitism that he was trying to downplay.