The other day, the following tweet got me thinking:

My favorite part of 2017 has been all the woke children. pic.twitter.com/r75SgiNkvn

Here is one of those favorites 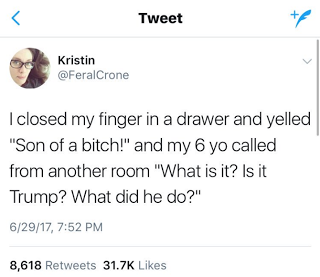 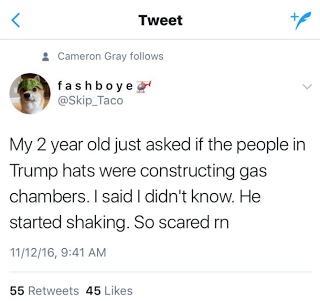 It got me to thinking about how adults pass on their opinions, and sometimes their hate, on to their children.

But while it got me to thinking about how Palestinian Arabs in general, and Hamas in particular, do this, it also got me thinking closer to home.

I recall when I was teaching, I passed by a class learning Sefer Bamidbar (Numbers). They were learning about the quail mentioned in Chapter 11 and I could see one girl was confused. I went over and asked her what was puzzling her and she said she did not know what the Hebrew word “slav” meant. Rather than just tell her, I asked her “well, what is the name of the Vice-President?” With eyes wide, she turned to me and asked “it means idiot?”

Weeks later, at parent-teacher conferences, the parents assured me they had no idea where their daughter got the idea to say that, and insisted they did not talk that way at home. I had every reason to believe them. I was not concerned.

But I am concerned about something else I remember.

I remember a post on Michelle Malkin’s blog years ago in 2005. She wrote about products that were then on sale online on CafePress.

Products such as this:

On November 2, the entire civilised world will be praying, praying Bush loses. And Sod’s law dictates he’ll probably win, thereby disproving the existence of God once and for all. The world will endure four more years of idiocy, arrogance and unwarranted bloodshed, with no benevolent deity to watch over and save us. John Wilkes Booth, Lee Harvey Oswald, John Hinckley Jr. – where are you now that we need you?

Brooker did “apologize” later to those who misunderstood his ironic humor :


The final sentence of a column in The Guide on Saturday caused offence to some readers. The Guardian associates itself with the following statement from the writer.

“Charlie Brooker apologises for any offence caused by his comments relating to President Bush in his TV column, Screen Burn. The views expressed in this column are not those of the Guardian. Although flippant and tasteless, his closing comments were intended as an ironic joke, not as a call to action – an intention he believed regular readers of his humorous column would understand. He deplores violence of any kind.”

The article has now been removed from the Guardian Unlimited website.

Malkin goes on to note that in April 2005, Pat Buchanan suffered multiple assaults on campus. He was not the only one. The Washington Times reported back then about William Kristol and Patrick Buchanan at two separate campus events having pies and salad dressing tossed at them, while the media played it as a joke. The editorial concluded:


Violence, of course, should be intolerable no matter who is on the receiving end, and must be rejected by people of goodwill, whatever their political ideology. It is ironic that college campuses — which typically style themselves as bastions of free speech and tolerance — are increasingly the scene of intolerant, thuggish behavior. These days it is being directed at folks who don’t subscribe to the prevailing liberal orthodoxies.

This was over a decade ago. What we see happening now on college campuses around the country is nothing new. The cynic in me wonders if the media taking this seriously now might be because of whom this can be blamed on.

No, I am not claiming that this is a purely left wing phenomenon. I am not interested in pointing a finger in that regard.

My concern is that the kind of hate exhibited against President Bush may be likely to emerge against President Trump, especially considering how the media, both the old media and especially the newer social media, have early on indicated the lack of any line which they will not cross, or at least test.

And I wonder again how different this is from what we regularly read about Abbas and Hamas doing to demonize Israel and incite hatred — and much worse — against Israel. The government, laws and culture are very different, but we are still only into the first year of Trump’s term, and the media onslaught shows no sign of abating. It continues to demonize, delegitimize and apply a double standard to Trump. If the worst that people say is that want to impeach Trump, I can live with that.

And no, I am not a fan of Donald Trump.

Purdue University’s Bill Mullen and Stanford University’s David Palumbo-Liu have created what they are calling the Campus Antifascist Network (CAN), which they claim is dedicated to combating “fascists” who use “‘free speech’ as a façade for attacking faculty who have stood in solidarity with [targeted] students.”

But neither Palumbo-Liu nor Mullen are very particular about the kind of free speech they are willing to protect:


Meanwhile, both Palumbo-Liu and Mullen have been leading figures in the academic campaign to boycott, divest from, and sanction Israel. In 2014, Mullen issued a call on anti-Israel site Electronic Intifada to “de-Zionize our campuses.” Palumbo-Liu, in a 2016 piece titled, “9 things you need to know about the Israeli occupation of Palestine,” recommended readers look to alternative news sources for their information on the region, including several sites accused of publishing anti-Semitic content. He later updated the article to remove If Americans Knew from the list, after receiving backlash for recommending an outlet that has repeatedly published conspiracy theories about Jews. IAK has been marginalized even by virulently anti-Israel groups, such as the U.S. Campaign to End the Occupation and Jewish Voice for Peace.

The hate being exploited by Abbas and Hamas is one of the reasons for the dysfunctional leadership of the Palestinian Arabs.

We cannot afford for a similar language of hate to be exploited to undercut the US.