Some tweets that show the hate outside AIPAC on Sunday:

Things got a little intense as some #AIPAC2020 attendees confronted them. Police seperated what looked like it was about to be a fight.

“This is America, not Israel,” one protester said. “You will get fucked up badly, motherfucker!” pic.twitter.com/gCrLaYt5n5

One activist held a peace sign✌️ and said into my camera, “Let them know, this doesn’t mean peace. This means victory. That’s what’s coming!”

“From the river to the sea, Palestine will be free!” they chanted on. pic.twitter.com/2s1C0dhnEq

“The Holocaust will come back to you,” one yelled at AIPAC attendees. “You’re going to get burned if you don’t give us the land!”

“Hitler will come back! Burned, all of you!”

Others tried to cool him down and keep him away from the frontlines a bit during this. pic.twitter.com/gpQIkFNJ0x

I couldn’t see anyone trying to stop the person threatening Jews with another Holocaust in the longer footage.

Also heard at the rally was a chant, “Resistance is justified when people are occupied” – a call for terrorism.

It is interesting to see the same people chant against the “occupation” and in the next breath saying “from the river to the sea, Palestine will be free.” It is obvious that when they say “occupation” they mean all of Israel. 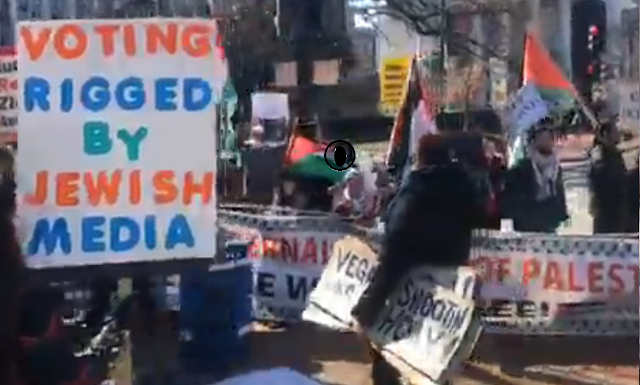 Again, I couldn’t see anyone objecting to the explicit antisemitism shown here.

The reason? Because people who hate the Jewish state also hate Jews.