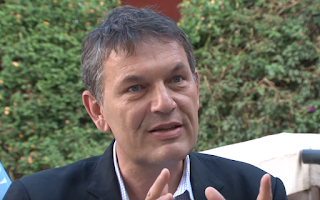 Even though UNRWA claims to be a non-political organization,  it always has been nothing but political, teaching generations of Palestinians that they will “return” to the long-gone homes of their ancestors in Israel. For example, in 2015 UNRWA launched a “#JustSolution” campaign centered around the “right to return” without even mentioning the possibility of Palestinians moving to a Palestinian state or becoming citizens of their host countries as potential “just solutions.”

But in a lengthy interview with UNRWA Commissioner-General Philippe Lazzarini at Executive Magazine, he seemed to actively avoid mentioning “return” as the solution to the “refugees” – and he contradicted the PLO by saying that they should ultimately move to a Palestinian state, not Israel:

It is not a goal in itself of UNRWA to celebrate the 80th or 100th anniversary. The ultimate goal is to have a fair and lasting peace whereby Palestinian refugees can have a state that they can live in and do not rely on UNRWA anymore. That is the ultimate goal.

This seems like a change at UNRWA, at least at the top.

Notable also was that Lazzarini didn’t blame Israel or even mention Israel at all in the interview. He did properly note how Palestinians in Lebanon cannot access many jobs, a problem made much worse during Lebanon’s own crises and COVID-19.
Lazzarini discussed UNRWA’s budget problems at length. Yet roughly a quarter of the people it provides services to live in “Palestine” already. There is no legal reason they would be considered refugees, and no real reason why they cannot be treated exactly as other Palestinians under PA and Hamas control. Any UNRWA funds earmarked to the dozens of camps and scores of schools in the territories could be redirected to the PA and the international community would be happy to help build permanent homes for the minority that still live in camps.
Actually doing this would cause an uproar among Palestinians who freely admit they use “return” as a means to destroy Israel. But UNRWA cannot survive forever with its ever-growing population of fake refugees. Continuing to provide services that should be the responsibility of the PA is diverting funds that are needed for the Palestinians in Syria and Lebanon.
Maybe, just maybe, Lazzarini – who succeeded the corrupt Pierre Krähenbühl – is trying to set the stage for changing the focus of UNRWA away from “return” towards something more realistic.