A Sudanese minister has said that he wants to see ties between Sudan and Israel.

Sudan’s minister of investment inspired controversy on Sunday when he called on Khartoum to normalise relations with Israel.
Mubarak al-Fadil al-Mahdi made the comments on national television, while also accusing the Palestinian people of “selling out”.
“They sold their land [to Israelis],” he said.
“One can agree with the Israelis or disagree with them, but they have a democratic regime,” he added.
According to Mahdi, his words were representative of his contemporaries in the ruling elite. The minister claimed there had been a shift in political opinion with regards to normalising relations with Israel since January.

“The issue was discussed during the Sudan National Dialogue Conference,” the minister said, adding that a number of ministers voted to change foreign policy towards Israel.

The feelings of the Hamas terror group were hurt:


The Palestinian Islamic Resistance Movement (HAMAS) Wednesday has expressed deep regret over statements by Sudan’s Investment Minister Mubarak al-Fadil al-Mahdi in which he called to normalize Sudan’s relations with Israel. 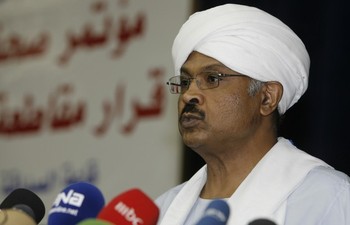 In a press release on Wednesday, Hamas expressed deep regret over what it described as “proactive and racist remarks” by al-Mahdi, saying his statements are “against the Palestinian people, Hamas and our valiant resistance”.

Hamas pointed out that al-Mahdi’s statements are not in line with the “values, principles and authenticity of the Sudanese people who love Palestine and support the resistance”.

It called on the Sudanese government, people and political parties to denounce these statements which contradict with Sudan’s “honourable stances towards the Palestinian issue and the legitimate rights of our people”.

Wanting peace is racist? Well, about as much as Hamas is a legitimate group.