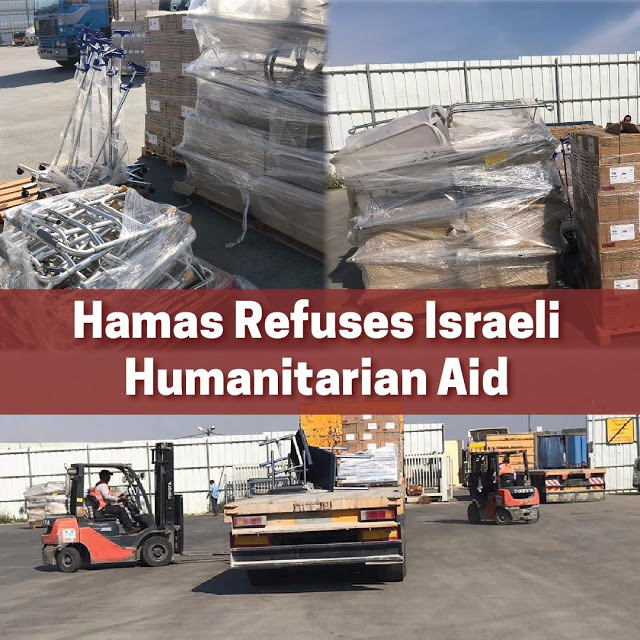 Earlier today, Kerem Shalom Crossing was opened and COGAT coordinated the entry of humanitarian aid, despite the recent riots by the security fence.

COGAT will continue to work with the international community to ensure the fast and efficient coordination of humanitarian goods to the Gaza Strip.

Yes, the IDF itself donated 25% of the medical supplies.

In middle of the night, trucks loaded with Israeli medical supplies were returned from the Gaza Strip to Israel.

Why? Because the humanitarian aid came from Israel. The Hamas terrorist organization prefers that Gazans die from lack of proper medical care, rather than to receive equipment from Israel.

Israel, despite the riots and terrorist activities on the security fence, had sent medical aid, which is now being returned in its entirety, because Hamas does not care for the lives of Gazans.

The Hamas-led organizers of the Palestinian protests along the Gaza border confirmed that they would not accept medicine “from the murderers of our people,” despite the widespread shortages of medical supplies in the coastal enclave.

The terrorist group accused Israel of “trying to improve its black image” by sending the humanitarian aid.

On the flip side, Arabs will make a big deal about how much they are helping their brethren in Gaza – and do little.

The most glaring example is Egypt, whose president Abdel Fattah al-Sisi publicly instructed his country to accept injured people from Gaza for treatment.

Even though the Gaza Health Ministry claims 2700 people were injured, 1360 by gunfire, so far Egypt has accepted only three people for medical treatment.

Appearance are everything. People are worth more dead than alive, as long as their deaths can be blamed on Israel. This is the mentality of the Gaza and Arab leadership. It is reprehensible – and it works.