In April, Hamas released a music video – in Hebrew – implying that the two Israeli soldiers whose bodies they are holding are still alive and that Israel’s claims to the contrary are lies.

The video ghoulishly appeals to the families of Staff Sgt. Oron Shaul and Lt. Hadar Goldin to pressure Israel to do a prisoner swap by showing pictures of the dead soldiers juxtaposed with their parents.

Lyrics of the song include ““Mother, Mother I’m here. Why are they saying that I’m dead?”, “Mother, Mother, the state is responsible for the lost ones. A day will come when those responsible will be judged,” and “Mom, Dad, I’m in the prison of the Qassam Brigades. Do all you can so the truth will come out.” 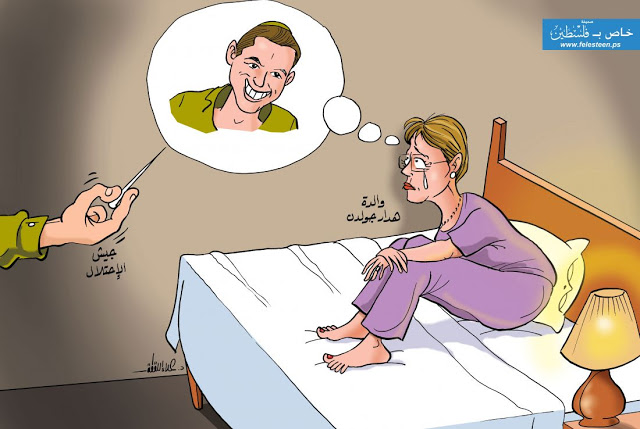 The cartoon shows the IDF (“Occupation Army”) about to destroy the dreams of Goldin’s mother that he can be returned home.

Tomorrow is the third anniversary of Goldin’s death.