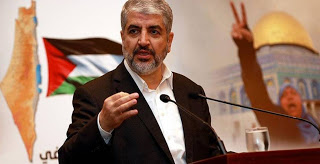 Since 2008, Hamas has been pretending – in English –  that it only targets Israeli soldiers, and is against killing civilians in Israel.

In an interview at the time, Hamas’ English-language spokesman, Abu Obaida, said, “There is no justification for targeting civilians. It is against Islam to deliberately kill unarmed civilians during jihad. In addition, our doctrine is to target the enemies army, security services, and support apparatus. But it is known that Zionist society is a militarized society. Service in the army is mandatory; and reserve duty continues past the age of 40. Our determined stance is that unarmed persons on both sides of the conflict should be left out of the fighting. However, we will not accept giving the enemy a free hand against our civilians.”

In Arabic, of course, posters inciting murdering Jews and celebrating their deaths are pervasive.


Chairman of Hamas political bureau Khaled Meshaal has called the family of Misbah Abu Subeih, the 40-year-old Palestinian who carried out a resistance attack in Jerusalem yesterday, offering the Movement’s condolences to the family and praising the courage of the late martyr.

“Palestinians are proud of this hero who sacrificed his life and blood to defend his people and the holy Aqsa Mosque,” Meshaal said.

He reaffirmed Hamas’s position that resistance remains the chosen road toward the liberation of Palestine.

“Our resistance shall persist until the land and sanctities are liberated, the prisoners are freed and the refugees are back to their homeland.” He stated.

In a separate phone call, Deputy Chairman of Hamas political bureau Ismail Haniya said that Abu Subeih set a model for the generations to follow.

“He was a staunch defender of Jerusalem and the Aqsa Mosque both in his life and his death,” Haniya said.

Hezbollah’s political wing also cheered the murderous rampage in Jerusalem. That “political wing” is still not considered a terror group by the EU or UK.