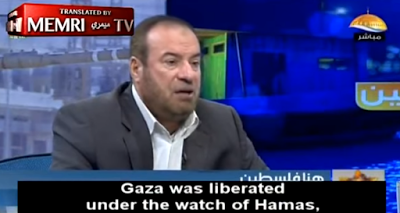 In the same interview where Hamas leader Fathi Hammad offered to give rockets to Arab countries to attack the Jews, he said:

Gaza was liberated under the watch of Hamas, through the Jihad of Hamas, with its men, its plans, and its leaders. Gaza has become the first Palestinian area to be liberated in this era, Allah be praised. (Hamas) has proven itself through its rule – the Jihadi, political, progressive rule of Gaza. Allah be praised, nobody has died of hunger or anything. On the contrary, following the liberation of Gaza, our Jihadi, ‘Izz Al-Din Al-Qassam units have become an army, Allah be praised

Gaza is “liberated” and he contrasts it with the PA-controlled areas, which he would obviously consider to be occupied.”

The UN, ICRC, Amnesty and HRW all claim, falsely, that Gaza is still occupied – when even its own leaders brag about how they are completely independent and liberated.