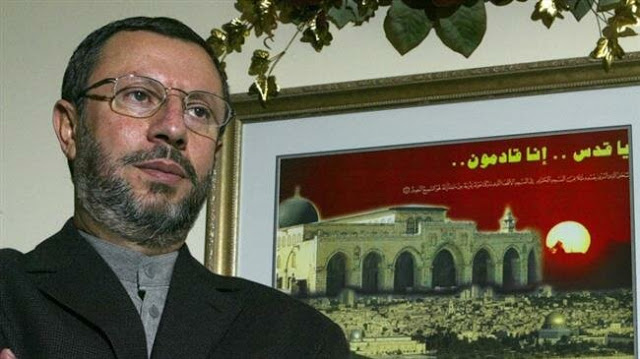 I cannot find this story in Israeli media yet. From Al-Manar, apparently from AFP::

US officials have handed over a former Palestinian presidential candidate and university professor to Israel after keeping him 11 years in prison on charges of racketeering and collecting funds for the Hamas resistance movement.

The Council on International Relations – Palestine, in a statement released on Thursday, denounced American authorities for extraditing Abdelhalim al-Ashqar to ‘Israel’, stressing that US officials bear full responsibility for the fate of Ashqar, who is now in the hands of the “criminal” Tel Aviv regime.

He was discharged from his teaching position at Washington University in August 2004. He was subsequently arrested, charged with racketeering and illegally collecting funds for Hamas, and put under house arrest.

Ashqar nominated himself as an independent presidential candidate in the January 9, 2005, Palestinian election. He was one of the 10 contenders seeking to succeed Yasser Arafat, who died on November 11, 2004 as head of the Palestinian Authority.

Given how Hamas condemned the extradition, it is tacitly admitting that he was is a Hamas activist:


Hamas leader Ismail Haniyeh on Thursday condemned the United States for handing over a former Palestinian business professor in the U.S. to Israel after serving his sentence.

“The U.S. administration’s decision to hand over the Palestinian professor, Abdel Halim al-Ashqar, is strongly condemned and it is a violation of international norms and laws,” Haniyeh said in a press statement.

He added that he ordered the political relations department of Hamas to “make contacts with brotherly and friendly Arab and Islamic countries to work on hosting him instead of handing him over to the Israeli occupation.”

Al-Ashqar, originally from the northern West Bank city of Tulkarem, was a former associate professor of business at Howard University in Washington DC. He was also a former candidate who ran in the last Palestinian presidential elections held in 2005.

Haniyeh hailed al-Ashqar as “one of the most recognized national figures in terms of science, belonging to his homeland and his cause, and the Palestinian people are proud of him.”

He also called on international institutions and human rights groups to intervene to release al-Ashqar and secure his life.

Israeli official sources did not make comment on the event.

According to the Investigative Project on Terrorism, in 1993 Ashqar  incorporated the al-Aqsa Educational Fund (AAEF) at the University of Mississippi which raised funds for Hamas. Ashqar was a Research Associate at the United Association for Studies and Research (UASR), which was founded in 1989 by the head of the Hamas Political Bureau, Mousa Abu Marzook. Prior to moving to the United States, al-Ashqar had served as head of Public Relations at the Islamic University in Gaza for a period of about eight years. The university was co-founded by Hamas founder Sheikh Ahmed Yassin.

The IPT’s documents indicate that Ashqar was merely one of many Hamas activists raising money in the US.