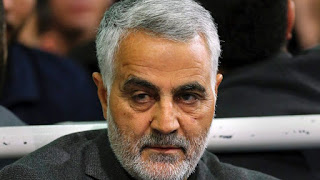 Al-Jarida, considered an Israeli mouthpiece, quoted a source in Jerusalem as saying that “there is an American-Israeli agreement” that Soleimani is a “threat to the two countries’ interests in the region.”

The agreement between Israel and the United States, according to the report, comes three years after Washington thwarted an Israeli attempt to kill the general.

The report says Israel was “on the verge” of assassinating Soleimani three years ago, near Damascus, but the United States warned the Iranian leadership of the plan, revealing that Israel was closely tracking the Iranian general.

The incident, the report said, “sparked a sharp disagreement between the Israeli and American security and intelligence apparatuses regarding the issue.”

I’ve looked at al-Jarida over the years, and not one of its spectacular scoops that have been picked up by mainstream media has been verified.

In 2012, a foiled assassination plot against Ehud Barak in Singapore.
In 2015, it reported that the US threatened to shoot down Israeli planes en route to bomb Iran.
It reported Gilad Shalit about to be released in 2009, two years before it happened.
It claimed Israel was about to bomb Iran in 2009.
It reported other Israeli assassinations of Hezbollah and Hamas figures back in 2008.
It claimed to have had the first interview with  Egyptian president Sisi- ahead of any Egyptian media! (The interview was fiction and Egypt denied any such interview.)

Who considers Al Jarida to be an Israeli mouthpiece? Why would any Israeli want to leak information to an obscure Kuwaiti paper instead of one in Tel Aviv or the US? Why are Kuwaiti reporters, of all people, supposedly so well connected?

This is lazy, unethical journalism by Haaretz (and others have done the same with Al Jarida.)

Reporting on a story by another paper with no credibility isn’t reporting. It is spreading lies.

UPDATE: I forgot that this “Israeli mouthpiece” reported in 2016 that “Jews are the biggest terrorists in history.”