In late November, Haaretz (Hebrew) published a somewhat satirical letter making an analogy between the bonfires of the Bar Kochba revolt and the arson fires in Israel:

Some 2,000 years ago an event attributed to the Bar Kokhva Revolt and marked by lighting fires accrued in the history of our people. Some 50 years ago Israel conquered the West Bank and since then, via the “Settlements Project”, Israeli governments continue to deprive the Palestinians of their lands. This historic move has an existential significance for the fate and future of the Palestinians as a nation. It seems that some Palestinians what to mark this 50th anniversary by lighting fires.

We don’t like it, but we can understand them.

Amos: Amusing letter. Certainly worth publishing (even if it agrees with the Right’s claim that there was an organized Palestinian arson attack which I totally reject).

Amir: Amusing?! Everything is publishable?

Amos: Read it with a grain of salt. Certainly amusing (but that’s just my opinion which you asked for).

Amos: I’ll explain: the letter is amusing in it’s wording but says what you’ve already heard: it’s the right and duty of the conquered and dispossessed to throw stones (and light fires). [link]

Yonatan Yahav: What about his “right” to blow up buses and shoot babies in the head (Shalhevet Pass)?

Amos: He has no right, but colonialism has shown that the conquered and dispossessed can only achieve freedom via terror, because without that the colonizer will not give up his privileges. I oppose terror but I know it won’t be eradicated until Apartheid is eradicated. In a normal country the Ministry of Welfare removes kids from the possession of their parents if they pose a threat to them. If I’d say that this how Shalhevet Pass should have been treated you’d say I’m insane, but at least she would be alive today. 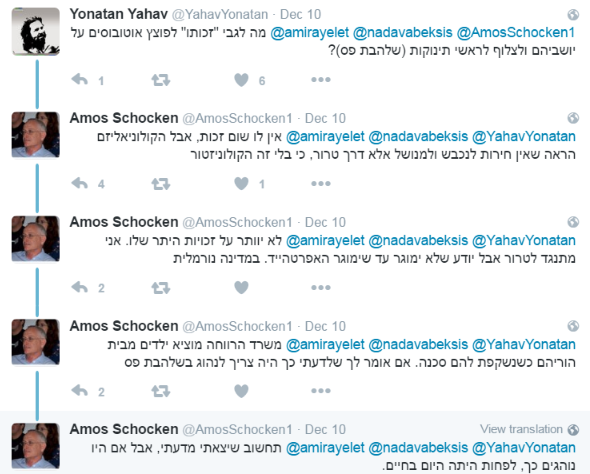 Could you imagine that Schocken would ever suggest that the authorities take away children of Arab terrorists because of the danger that the IDF might bomb their houses?

Moreover, Schocken’s pretense that he opposes terror rings hollow.  It is difficult to believe that Schocken is against Palestinian terror if he believes that it is the only way to achieve a laudable goal. Obviously if he considers what he calls “apartheid” to be a worse crime than terror, he believes terror is justified, and the victims of terror are the ones who are guilty of being victims.

This is not merely insane. It is criminal.