Get ready for the next round of falafel wars.

Google is celebrating falafel in the Google Doodle today:

But notice that the falafel in the doodle goes into pita bread, along with what is presumably tehina and what Israelis call Israeli salad.

Now, no one doubts that falafel pre-dates Israel. But the idea of falafel in pita with salad and toppings came, as far as I can see, from Yemenite Jews who immigrated to Israel. I see a number of sources that say this and I cannot find an Arab source that says that it was known to have been served in pita before the 1940s, when it was already gaining popularity (and more than a few jokes) in Israel even among the Ashkenazim, as this 1940 Palestine Post story shows: 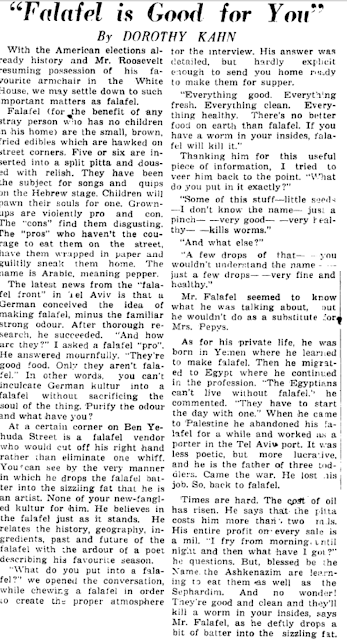 Jews in Palestine seem to be the ones who turned falafel into a street food, and a pita (or laffa) is necessary to hold the falafel when buying it on the street.

Assuming this is accurate, Google is advertising Israeli falafel.