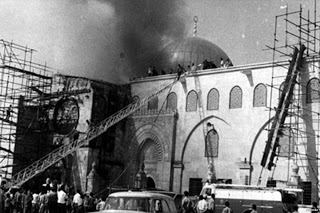 This week is the 50th anniversary of the burning of part of the Al Aqsa Mosque by a crazed Australian Christian, Denis Michael Rohan.

Every year the Arab media claims that Jews and Israel were the ones who set the fire. On this half century anniversary, get ready for some serious incitement.

Hamas is starting by declaring that this Friday they this week’s theme for the Friday “March of Return” demonstration is dedicated against the “Judaization of Jerusalem,” with the 1969 arson as exhibit A.