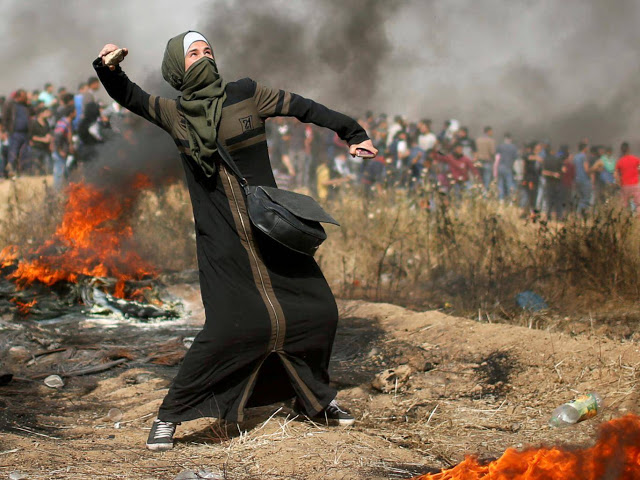 The Independent (UK) adds to the long list of deprivations that Gazans are forced to live through.

For thirteen long years, the desperate Gazans have been unable to directly attack Israeli soldiers.


Since Israel’s decision in 2005 to withdraw its troops from bases inside Gaza, redeploying to the perimeter with a blockade at sea and control of the skies, it has been even harder for ordinary Palestinians to resist in the way Ahed Tamimi did.

In the days of the old intifada any Palestinian could land a stone on a soldier with no trouble, as the soldiers were in amongst them. “Now we can’t be like Ahed because we can’t even see a soldier, never mind hit them with stones. We never get close enough to kick or punch. If only we could,” a young man complained.

For those in Gaza this inability to see or hit back at the enemy has created a uniquely desperate despair, which has spilled out into the buffer zone protests of recent weeks. Perhaps for this reason, Hamas understood it could not hold back any protester and allowed women to protest too.

It is a sad fact that Western media cannot find any Gazans who have starved under Israel’s brutal siege. They cannot blame Israel for withholding fuel or electricity or medicines – that is the Palestinian Authority that does that. They cannot blame Israel for withholding salaries for workers – that is both Hamas and the PA, depending on the circumstances.

But, dammit, they can blame Israel for withdrawing Jews from Gaza, which makes it so much harder for Palestinians to attack them! It is a truly awful feeling, not being able to attack Jews directly, and it causes a “uniquely desperate despair” that forces Hamas to allow women who are compelled to throw stones towards the border.

It is truly awful not to be able to attack soldiers and Jews with impunity like they used to. They want so much to be like Ahed.

Speaking of, some new video surfaced of Ahed Tamimi’s kicking, punching and grabbing at soldiers from 2017. So heroic, to attack people who she knows will not fight back because she is a minor.