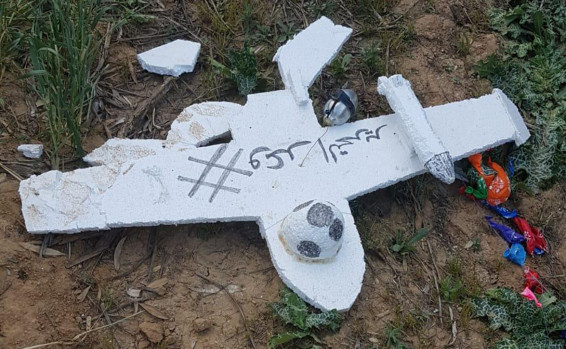 On Sunday morning, Israeli police found a small glider made from polystyrene that had an explosive device attached to it that came from Gaza.

The explosive was neutralized.

A similar booby-trapped  plane was found last week, that one attached to balloons. My guess is that if the balloons are shot down (with bullets or lasers) or naturally explode when they gain enough height, the plane can glide a long distance before landing, increasing the range of the improvised explosives.

There were some 50 balloons with incendiary devices launched from Gaza on Sunday, perhaps to make up from Hamas canceling the “return march” on Friday.

There is no weapon more indiscriminate that incendiary balloons. Even the most rudimentary rockets can be aimed a little bit, but these balloons can land anywhere.

Which makes the silence of human rights organizations about this clear violation of international law even more egregious.