We will take down the border (with Israel) and we will tear out their hearts from their bodies.
Hamas leader Yahya Sinwar, April 6, 2018, on Al Jazeera TV

The sit-in demonstration is set to culminate on May 15 — the day after Israeli independence
NBC News, April 5, 2018

Once again, whenever the conflict between Palestinian Arabs and Israel heats up, a second, parallel story develops as well: the media bias towards Israel.

On April 7, David Halbfinger reported Though Deadly, Gaza Protests Draw Attention and Enthusiasm. He informs us that:

Halbfinger has no problem writing that “Hamas, the Islamic militant group that rules Gaza and seeks Israel’s destruction, has always advocated armed struggle” — and then without skipping a beat Harbfinger claims that “so for Gazans, even a tentative experiment with nonviolent protest is a significant step.”

It’s not just any Islamic militant group seeking the destruction of its enemy that experiments with nonviolent protest.

The Financial Times has a similar problem using the “T” word.

The Financial Times quotes Ahmad Abu Artema, one of the organizers of the protest, who admits


Hamas was no interloper — he and his colleagues, mostly penniless, disorganised and inexperienced, invited the Islamist movement in, hoping for logistics, some media coverage and moral support

and then, like Harbfinger, the article tries to soften the implications of Hamas involvement, claiming that


Hamas ordered its civilian employees to join the march, shipped in food and water and set up tents. Like everything else in Gaza, the march belonged to Hamas, and threatened to trigger a new bout of confrontation between the militants and Israeli forces. [emphasis added]

The Financial Times will not come right out and report that these “civilian employees” are trained terrorists, nor will The New York Times. In fact, the word “terrorist” does not appear in either article.

Writing in The National Post, Vivian Bercovici, a former Canadian ambassador to Israel now living in Tel Aviv, writes about the discrepancy between the claim for peaceful protests and the reality:


Israel’s critics claim the IDF fired recklessly on a “peaceful protest,” massacring innocents. Thing is, peaceful protests do not encourage participants to overrun an international border, or use weapons, while threatening to conquer the country and murder its people. Thousands of Israeli civilians live within a few hundred metres of this fence, in agricultural settlements that have been undisputedly part of Israeli territory since 1948. Peaceful protests are not organized by terrorist organizations and led by terrorist leaders, some of whom show up with Molotov cocktails and other weapons.

If taking Hamas talking points about nonviolence is not jarring to The New York Times’ readers, then chances are that neither is any of the other propaganda points that the article takes at face value.

For example, Harbfinger writes that Israel uses “disproportionate force to prevent what they believe could be a catastrophic breach in the Gaza fence.” The phrase “disproportionate force” is a term used in international law, and in that usage goes beyond just one side causing more damage or taking more lives than the other one.

Harbfinger uses another term of international law out of its proper context when he writes about Gazans wanting to “protest Israel’s longstanding blockade of the impoverished territory and its two million residents” and that “the 11-year-old blockade by Israel and Egypt has driven it into crisis.” [emphasis added]

In What The New York Times Isn’t Telling You About Israel’s Gaza ‘Blockade’, Ira Stoll describes the hundreds of thousands of tons of supplies — medical, agricultural and building — to Gaza, in addition to water and electricity. The fact that Israel controls its border with Gaza, Stoll notes, is something that nearly all countries do with their borders.


Accusing Israel of a “blockade” of Gaza when in fact Israel is allowing food, medicine, building supplies, electricity, and water into the territory is inaccurate. It gives Times readers a false impression of what is actually happening, uncritically echoing Palestinian propaganda. That’s not to say that the situation in Gaza is a picnic. But the blame for it lies with the Hamas terrorist organization, not with Israel or some “blockade” imagined by Times journalists.

Harbfinger appears particularly invested in the Palestinian Arab narrative. He quotes Yousef Munayyer, executive director of the U.S. Campaign for Palestinian Rights, who “likened attempts to cross Israel’s fence to American civil rights marchers’ attempts to cross the Edmund Pettus Bridge in Selma, Ala., more than 50 years ago”

Here are some pictures of that protest march across Edmund Pettus Bridge in 1965: 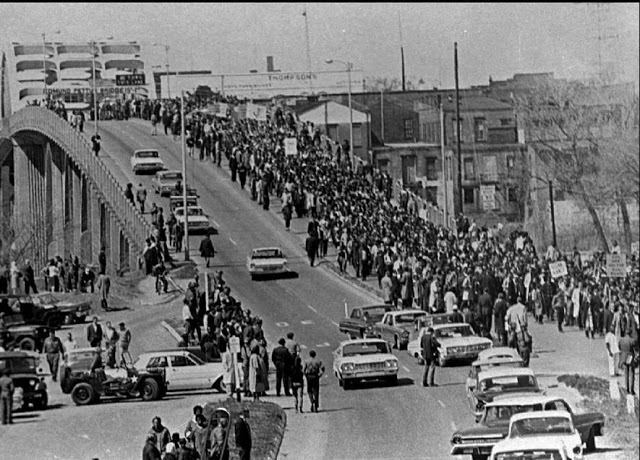 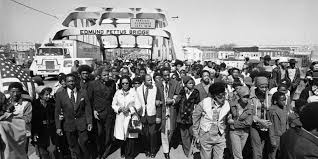 Here are pictures from the Gazan “peace march”: 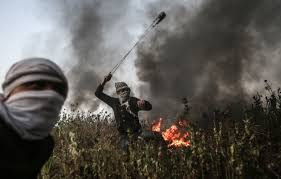 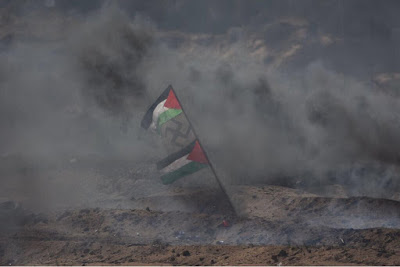 Mr. Munayyer doesn’t. Harbfinger goes on to quote him that


it’s very important in this moment for the international community to be supportive of the protesters. They’ve always said, ‘Abandon militancy, abandon violence.’

Actually, what “they” have said is to stop the terrorist attacks and the deliberate murder of civilians – a distinction apparently lost on both gentlemen.

Harbfinger also quotes Nathan Thrall, an analyst for International Crisis Group “who closely watches Gaza.” He is more than that. Thrall is the author of the book “The Only Language They Understand: Forcing Compromise in Israel and Palestine.” Last year, Thrall wrote a piece for The Guardian, entitled Israel-Palestine: the real reason there’s still no peace, an article described as “an adapted extract” from his book.

Thrall is a big fan of using force to achieve peace, especially applied to Israel, based on the premise that “Israel, for its part, has consistently opted for stalemate” — as opposed to accepting the standard proposals that have been suggested for peace. Thrall advocates applying force on Israel, following the examples of Eisenhower, Ford, Carter and James Baker.

But to Thrall’s dismay, US Administrations seem to have stopped applying that kind of pressure.


As a result, Palestinians have been unable to induce more from Israel than tactical concessions, steps meant to reduce friction between the populations in order not to end occupation but to mitigate it and restore its low cost.

Counted among those mere “tactical” concessions are apparently the establishment of Palestinian Arab control over Gaza and “the West Bank”. This seems to be chump change to Thrall, who instead advocates “forcing Israel to make larger, conflict-ending concessions [that] would require making its fallback option so unappealing that it would view a peace agreement as an escape from something worse.”

Harbfinger could not have picked anyone more enthusiastic to to add his two cents on the Gaza riots.

But with all of that, maybe things are changing.


Hamas, a group that was previously able to terrorize Israelis with suicide bombings, kidnappings and rocket attacks, is now reduced to staging riots, setting truck tires on fire and getting its young leaders killed in hopeless confrontations with the IDF to generate sympathetic media coverage. News outlets assist Hamas in its PR war, but the fact is, Israelis are increasingly safe from Hamas attacks — and that’s the story that matters.

And perhaps we could finally be due for a change in that media coverage.

Writing about Downhill slide: Posturing over the ‘plight of Gaza’ has passed peak virtue-signaling, J.E. Dyer — a retired US Navy intelligence officer — notes:


It probably doesn’t feel this way to the people trying to explain why Israel has to defend herself, but over the past week, since Hamas’ border fence “protests” from Gaza cranked up, there has been a distinctly tinny, perfunctory sound to the adverse media coverage and political shouting.

…The difference between now and a few years ago is that there is mostly a flat, exhausted silence surrounding the rote paroxysms from the legacy media and the West’s radical partisans of Hamas. The public mind has moved on.

It has done so for good reason. The “Palestinian” narrative was always manufactured: a great disservice to the Arabs in Judea, Samaria, and Gaza, because it was false and misleading, and never about constructing a future for them.

The narrative’s essentially worthless nature is thrown into stronger relief by the tectonic shifts of regional geopolitics. The Syrian civil war, with its growing Iranian menace and its recurring chemical weapon attacks, is only a few dozen miles away. Hamas bearing the brand of Iran, on the other side of Israel, is not a net positive for anyone but the radical mullahs of Qom.

Is the Middle East really changing?
And if so, how long will it take the public — and the media — to pick up on it?