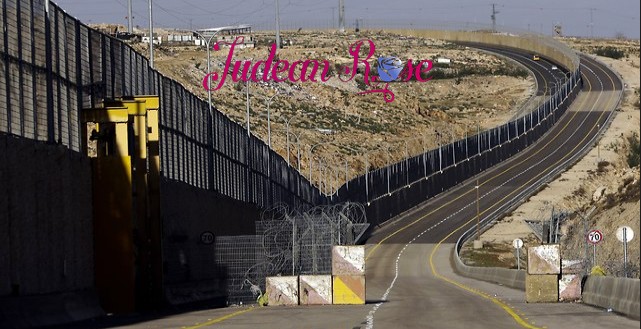 Way back in January, Israel opened Route 4370, a stretch of highway that leads from Samaria to Jerusalem. This particular 5-kilometer stretch of 4-lane highway is divided by a wall that runs smack down its middle. The wall divides PA citizens from Israeli citizens and those with Jerusalem entry permits, separating these populations so they never have to come in contact with each other.
The new stretch of highway eases traffic congestion, cuts down on accidents and fatalities, and prevents terror. In other words, route 4370 saves lives and time.

The outcry, of course, was predictable. The word “Apartheid” was heard, and comparisons to South Africa regurgitated ad infinitum by the usual Arab talking heads as the eager media rushed to print. Speaking to the Times of Israel, Palestinian Liberation Organization Executive Committee member Ahmad Majdalani remarked that “This is an Israeli example of apartheid and racist separation that once existed in South Africa. Any Israeli who believes in democracy should feel ashamed about this new road.”
The Palestinian Authority issued an official statement that the “apartheid” road “poses a challenge to the credibility of the international community.”
Now these things were bound to be said by those who hate Israel: “racist,” “Apartheid,” “South Africa.” The good civic deed of easing traffic and keeping people safe was predestined to be miscast and shown in an evil light. But still, it must be said: how can this divided road be considered discrimination when Arabs and Jews share a single side of this divided road?
Because this is exactly the case: Jews and Israeli Arabs and Arabs with Jerusalem entry permits are on one side of the walled highway, with PA Arabs on the other. It isn’t that Arabs are barred from the road, it’s that Arabs who are governed by a different body, the PA, are barred from sharing the Israeli side of the road.
And that is because they, the Arabs of the Palestinian Authority, WANT their freedom from Israel and are the avowed enemy of the Jewish people. So we gave them their freedom: they don’t have to mix with us, or drive on our roads, and we are safe from their hatred.
After all, it’s not like their hatred is something that remains in their hearts and minds, ideological and dormant. Theirs is an active and violent hatred that often finds expression in terror attacks. Which makes separation the only prudent course of action for Israel.
So there you have it: one side of the road is mixed Arab and Jew. These are the Arabs who are willing to coexist with Jews and share a highway with them. Those Arabs who don’t wish to coexist with Jews, the Jews of the PA, are on the other side of the highway, across the barrier.

This is the same paradigm we see with the Peace to Prosperity conference in Bahrain. Ashraf Jabari, a businessman from Hebron, is happy to attend and look at opportunities to help his people. Even if Israelis and Israel are to be part of that opportunity.

Ditto, Mohammed Arif Masad, who lives in Burqin, not far from Jenin. These men understand that their people are suffering. They understand that at least for the time being, the Jews are in Israel to stay, that they might as well work alongside them and accept an opportunity. Which is how coexistence works, a thing which is not all hearts and flowers.

This attitude of coming to terms with Israel and making the best of the situation, is distinct from the official stance of the Palestinian Authority on the Bahrain conference. That stance is a stance of antisemitic intransigence and xenophobia. Anything connected to the conference, including Donald Trump, is labeled an evil Jew (is there any other kind?) by association with Israel. From Palestinian Media Watch (PMW):

A Palestinian dressed as former PA leader Arafat burned a poster portraying Trump with red satanic horns and a swastika on his forehead and with US and British flags with swastikas and a blue Star of David over them (above). In another photo, Trump is crossed out with a red “X.” Trump’s peace plan is referred to as “the Deal of the Devil.”

This official PA attitude to Israel and the Jews shows a doubling down of hatred, a refusal to countenance Jews, Israeli and otherwise, as human beings like themselves. It is not Israel that wants to separate from them. It is the PA that insists on separation, even where Israel has extended the hand of peace and prosperity.
Getting back to Route 4370, we have two sides of a road. On one side we have Arabs and Jews driving on the same stretch of highway. These are the Arabs who have accepted the situation and are making the best of things. Israelis are happy to coexist with them on the same road. Just as they are happy to work with them in Bahrain.

Those on the other side of the road, refuse to see Jews as human beings or even just mind their own business and drive. That is the side that is emulating South African Apartheid in word and deed: the side of the road that belongs to the Palestinian Authority. Because if

the PA really wanted that wall in the road to come down, it would be so easy. All they’d have to do is decry the violence, lay down their arms, and come to terms with the Jewish State of Israel.

The proof is staring down at them from across the road, where Jews and Arabs are driving side by side. Just as it is in Bahrain, where Arabs and Jews are sitting together at a conference, talking about how to make things better for the Arab people.

If the PA wanted to end this dire state of affairs where separation is necessary for safety, they’d be on the Israeli side of the road. The one with the mixed Jewish/Arab population, content to drive in peace.
In Israel.
Where everyone is safe.