TOP NEWS
http://elderofziyon.blogspot.com/2018/01/freeahedtamimi-so-she-can-become-next.html
By Petra Marquardt-Bigman
There is a refreshingly honest Twitter account devoted to promoting the otherwise appallingly deceptive campaign to #FreeAhedTamimi. Among the recently postedtweets is one declaring: “Israel is dreading that Ahed is the next Leila Khaled, they will try to break her in anyway or shape. But what they forgot is to see the fierce and fearless & determine look through her blue eyes. #FreeAhedTamimi #FreeGeorgesAbdallah.”
It isn’t all that important if this Twitter account is really an “official” account sanctioned by the Tamimi family, because the images attached to the tweet are clearly real – and truly worth a thousand words. 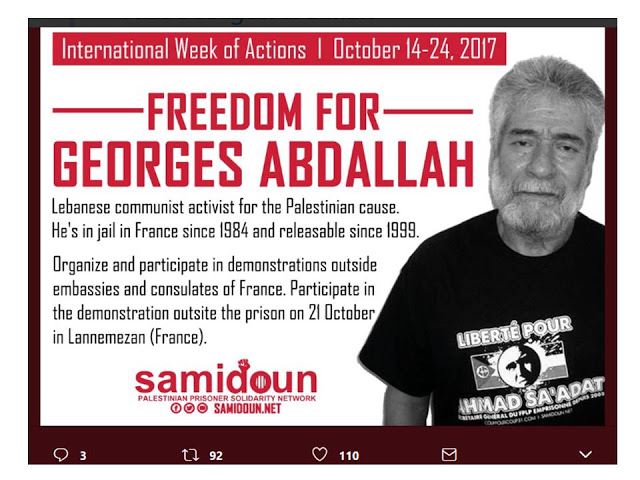 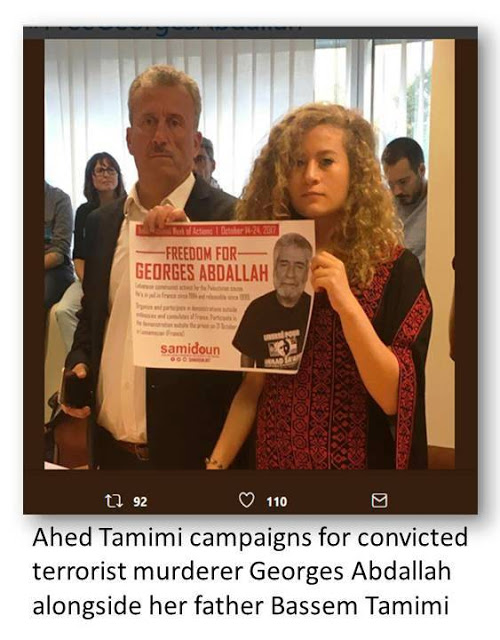 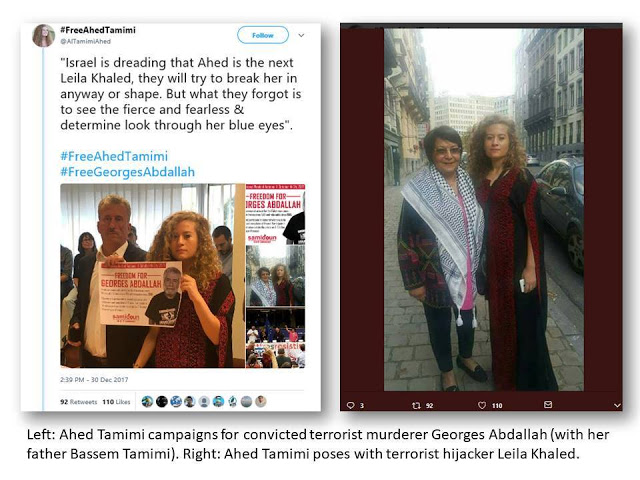 So let’s recall who Leila Khaled and Georges Abdallah are.
Leila Khaled, with whom Ahed posed for a photo, is a member of the Popular Front for the Liberation of Palestine (PFLP). The PFLP is notoriousfor having “pioneered such terror tactics as airline hijackings” and perpetrated “hundreds of terrorist attacks.” As Wikipedia puts it without a trace of irony, Leila Khaled “is credited as the first woman to hijack an airplane.”
If Ahed Tamimi wants to be “the next Leila Khaled,” we can only wonder and worry what pioneering acts of terror she will once be “credited” with.
Now let’s turn to Georges Abdallah, for whom Ahed campaigned alongside her father Bassem Tamimi: Abdallah is “a Lebanese militant” who “was arrested in 1984 and sentenced to life in prison in 1987 for the 1982 murder of Lieutenant Colonel Charles R. Ray, who was an assistant US military attaché and murder of Israeli diplomat Yaakov Bar-Simantov outside his home in Paris on 3 April 1982, as well as involvement in the attempted assassination of former American consul in Strasbourg Robert O. Homme.”
As explained in a subsequent tweet, the photos showing Ahed and her father Bassem Tamimi campaigning alongside a terrorist for another terrorist are “from the conference on the role of women in the Palestinian popular struggle Sep 2017 and international days of resistance to Free Georges Ibrahim Abdallah Oct 2017.”
So let this sink in: just some three months before much of the mainstream media dutifully promoted fact-free propaganda about the wonderful Tamimis and their noble “non-violent” struggle, daddy Bassem and his famous daughter were all too happy to show that their idea of “non-violence” includes murder and airplane hijackings.
What’s beyond satire is that the “conference” promoting terrorism was hosted by two far-left Spanish members of the European Parliament. According to a reportin the European Jewish Press, pioneering airplane hijacker Leila Khaled used the prestigious platform at the European Parliament “to praise extremist violence and demonize Jews.  She glorified terrorism and trivialized the Holocaust. ‘Don’t you see a similarity between Nazi actions and Zionist actions in Gaza? … While the Nazis were tried in Nuremberg, no one has ever tried the Zionists,’ she said.”
The outcry resulting from this travesty eventually prompted the European parliament to endorse a proposal “to systematically deny access to all persons, groups, or entities involved in terrorist acts.”
Better late than never, I guess – though it remains amazing to see that terrorists like Leila Khaled and outspoken terror supporters like the Tamimis can apparently travel freely to Europe.
Now let’s look at one other gem from the #FreeAhedTamimi Twitter account: this tweetmanages to summarize the Tamimis’ agenda in just one word when it describes a photo of Hebrew graffiti praising Ahed as a “hero” as having been taken in “occupied Tel Aviv.” 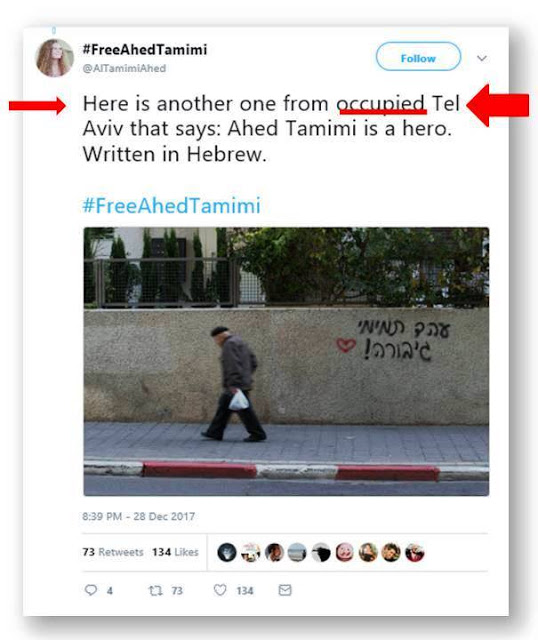 So next time the Tamimis tell credulous reporters that they’re fighting “the occupation,” know that they’re surely mightily amused and pleased that everyone prefers to ignore that as far as they are concerned, Tel Aviv is just one more occupied Zionist settlement.
And if everything goes well for the Tamimis, Ahed – “the next Leila Khaled” – will once be credited for her pioneering terror strategies to liberate occupied Tel Aviv.