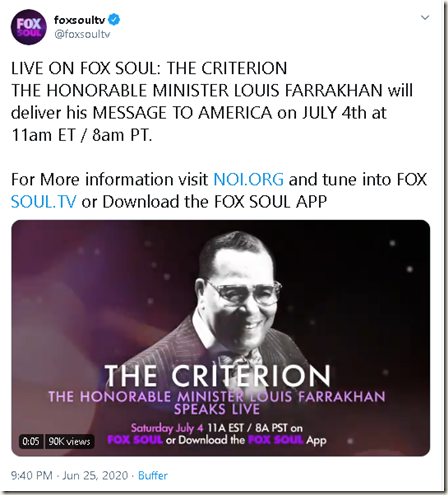 Would the normally right-wing Fox News allow a far-right KKK leader to give an hour long speech to the nation? Of course not.

So why on Earth is it okay to feature America’s most prominent antisemite on a national platform  – and give a plug to his webpage, where people can buy his books filled with Jew-hatred?

If the Fox Corporation is saying that Fox Soul has latitude that other Fox networks don’t have because it is geared towards blacks, then Fox is saying that Nation of Islam antisemitism is OK for blacks to listen to – presumably because blacks aren’t sensitive towards antisemitism as most whites are.

This  means that Fox is treating blacks as if they are simply expected to be sympathetic to Farrakhan’s messages of hate towards Jews.

While there is a definite problem with black antisemitism, the large majority of blacks are not antisemitic according to national surveys. By pandering to some sort of idea that NOI-style Jew hate is perfectly OK to broadcast to blacks, or that Farrakhan’s antisemitism is not offensive to blacks, Fox is treating blacks like they are not as socially advanced or sophisticated as whites.

This is racism. But it is the type of racism that seems to be acceptable to a great number of people, both on the right and the left.

Blacks are expected to condone antisemitism. It is inconceivable that a black person would be  “canceled” for Jew hate the way white people are “canceled” for racism. If you don’t think that Farrakhan’s noxious views are worse than Mel Gibson’s, then you are looking at the color of his skin rather than the content of his words.

People who expect less morality, less sophistication, less intelligence and more antisemitism from blacks are racists. This is exactly what Fox Soul is doing.