While writing a recent post on Jews: From Asiatic, Mongoloid, Slavonic, Low-Level Caucasians To Privileged White Supremacists, I came across this on Twitter: 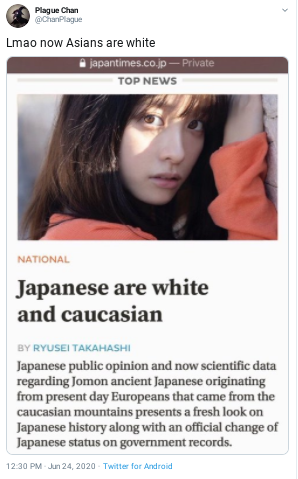 But that does not mean that the ‘whiteness’ of Asian Americans is not an issue.

Yes Magazine, features an article asking the same question Are Asian Americans White? Or People of Color? The answer, of course, is no, Asian Americans are not ‘white’. But apparently, you might have thought they are.

Because “on average Asian Americans are among the most successful in the United States,” though there are major differences, depending on the particular segment of the Asian-American population. The underlying assumption being that lack of success for a “person of color” might be due to racism — and that success itself is a sign of integration and with it, “becoming white.”

That would certainly seem to indicate that Jews are white, based on their financial success and apparent integration into society. (And let’s not start with the percentage of Nobel Prizes that Jews are awarded).

But more importantly, the article bases Asian American status as People of Color squarely on how they are treated. Regardless of the prosperity of the more successful Asian Americans, the problem of racial discrimination remains:


Asian Americans continue to experience discrimination, hate crimes and racial violence, xenophobia, concerning levels of racial/ethnic bullying in schools, and other indicators of racial marginalization in the U.S.

But if hate crimes and violence are the proof that Asian Americans are not integrated and therefore not ‘white’, then surely Jews pass that same test with flying colors.

If Muslims are not considered integrated enough to be ‘white,’ why should Jews — who regularly suffer more hate crimes each year according to the FBI — be considered white?

Yet Jews are considered ‘white’ — and white supremacists, at that.
Something doesn’t add up.

Michael Lerner approached this issue from another angle when he wrote in The Village Voice in 1993:


In the context of American politics, to be “white” means to be a beneficiary of the past 500 years of European exploration and exploitation of the rest of the world — and hence to “owe” something to those who have been exploited. So when Jews are treated as white in the United States, the assessment is not a crude physical one but a judgment of Jewish culture and civilization, history and destiny.

When Rome sent the majority of the indigenous Jews out of their native land, many found their way to Europe. Jews did not share in that exploitation, they were the victims of it — not to mention those Jews who remained and witnessed the Islamic invasion that came later.

The Spanish, who were explorers and colonizers. Does that mean they are…’white’?
What about the Italians, who did their share of exploration and exploitation?

For that matter, what about Muslims, who invaded:  Syria, Egypt, North Africa and then-Palestine (all then under Christendom) as well as Spain, Portugal, France, Sicily, Rome, Russia (under the Tartars), Anatolia, Constantinople, and the Balkan peninsula. [see: Bernard Lewis, “What Went Wrong” (p.4ff)]

It still doesn’t add up.

Obviously, it all depends on whose rules you are following, and now that Jews live in a time when people are drawing up sides to see who qualifies for People of Color — Jews are again being excluded, despite a history, culture, religion and language that demonstrates a separate ethnicity, and the fact Jews are anything but ‘white’.

In an op-ed in the LA Times last year, an African American woman suggested doing away with the term “person of color” altogether:


The terms “women of color” and “people of color” are meant to be inclusive. But, from my perspective, they only help to leave black people behind — specifically black women. While every minority group faces its own challenges in America, a “one size fits all” mentality toward diversity erases the specific needs of the most vulnerable communities. [emphasis added]

Considering how Jews ended up being the odd man out, one would have to agree.


But even more important is doing the hard work of understanding and fighting to overcome the distinct layers of injustice that face people of different identities — and different layers within those identities. A black person has different challenges than someone who is both Muslim and black, and a black, Muslim woman has different challenges still. Parsing the implications of these differences, instead of flattening them, is what it means to be “intersectional,” an important but widely misunderstood concept — even by the liberals who use it most. Intersectionality is not about building the biggest interracial team possible. It’s about catering to the individual needs of different communities to make sure no one is left behind.

Put this way, intersectionality is not a weapon to be used against Jews, but a group that Jews can not only be a part of but also contribute to — just as Jews contributed to the black community, long before Black Lives Matter became a weapon to attack the Jewish community today.

But that still leaves the problem of Jewish identity, and the need to recognize and embrace that Jewish identity. At a time when Jews are surrounded by those who want to define for Jews:

— at a time like this, there is a need to strengthen ties, not only with Israel, but with the Jewish community.

Other ethnic groups talk about the importance of their identity. Jews should too.

Returning to the article in Yes Magazine:


identifying as Asian American is not a biological destiny or question of geography, which would suggest a passive orientation (i.e. individuals are born Asian) rather than an active choice to identify in solidarity against matrices of oppression. [emphasis added]

For many of these ethnic groups, their identity is an active choice in the solidarity of their identity against what they see as US colonialism and racism.

For Jews, the danger may be more than that.

It is in seeing their Jewishness as simply a matter of birth. Considering Jews are historically threatened by both assimilation and discrimination, Jewish identity is more than an issue of solidarity. It is a question of survival.

And there are Jews for whom simply identifying as ‘white’ is not a guarantee of survival.

Intersectionality is being weaponized against Jews.
But instead of a threat, it should be a warning and maybe even an opportunity for Jews to get their act together.