Last week, I showed that a report by the International Crisis Group NGO seemed to knowingly misrepresent the facts about medical aid Israel allows into Gaza.

A tweeter, Inquisitive Native, published a thread that exposed far more lies in the report that was retweeted by influential figures.

The report hasn’t been corrected, which makes one wonder about the integrity and honesty of the International Crisis Group. It is acting far more like Amnesty and Human Rights Watch, who steadfastly refuse to acknowledge any errors let alone correct them, and far less like a truly apolitical independent NGO.

A quick look at its officers shows that there is nothing apolitical about the ICG.

It is headed by Robert Malley, one of Obama’s architects of the policy to weaken America’s allies and strengthen its enemies. He has a long history of anti-Israel writings, and was the main proponent of the theory rejected by everyone at Camp David and Taba that it was Israel that was at fault for the failed peace negotiations with the Palestinians. He has met with Hamas several times from his earlier tenure at ICG and there are reports that he has met Hamas within recent months. His father was a key figure in Egypt’s Communist Party.

And it looks like ICG was co-founded and funded by George Soros, who funds every single anti-Israel organization he can find. 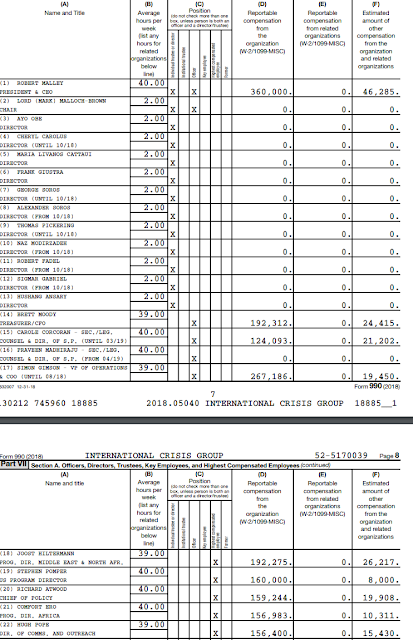 No wonder it is not willing to correct its falsehoods. It never meant to be accurate to begin with.