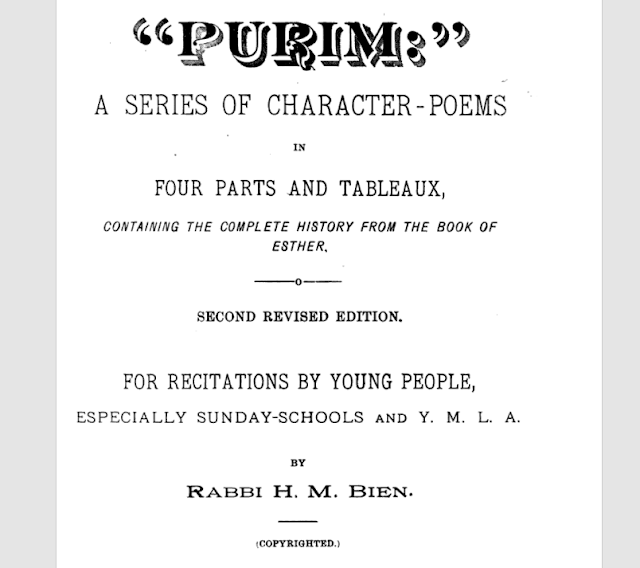 I found a play about the Purim story, written in rhyme, from 1889, by a Rabbi H. M. Bien. All I can find about him is that he lived in Vicksburg, Mississippi.

Here she as as she enters after being summoned by the King to show off her body.

Vashti (Enters weeping, r. h.)-
And this to me? the queen! unprecedented shame!
I will resent the outrage !-or Vashti’s not my name!
I, who brought up retired-strict Oriental fashion,
Now be made sacrifice to his unbounded passion,
For hollow pride and power. I? show myself? indeed !
(stamps her feet)
I will not go—no never-nor his vile bidding heed !

(Muses, walking to and fro—more composed.)
These men will always play our masters, and be they low or be they high,
Will rule and lord it over woman, at least they will imperious try.
Weak-minded, pliant and obedient, our sex most always does submit;
Aye! it were different had they only a little more of pride and wit.
For we by nature fair and lovely, the nobler part of human kind,
To men superlatively better, in soul and body, heart and mind;
We bear the burden of existence, serve from the cradle to the grave.
Yet could be free if we would never permit ourselves to be the slave.

I’d willingly become a beggar or instantly would rather die,
To be example to my sisters, while I my lord’s command defy.
True! he has given me these baubles, a royal diadem and crown.
Like pretty puppets men adorn us, with gaudy gems and costly gown;

And then degrade us as their creatures. Now let one learn what woman can
If once aroused ; that she is stronger than most despotic, selfish man.

I know the time is near approaching when females will their rights assert.
The more advanced will be determined to act harmonious in concert.
They will no longer then permit it, that man shall rule the world alone;
And will no longer be the servants of kitchen, feasting-hall or throne.

We too can traffic. plead and labor, can sculpture, sing and play and paint;
Strong-minded women will hereafter take Vashti for their patron saint.

Ahasuerus, he will rage and bluster, that I his bidding disobey !
I scorn his wrath-defy his anger; the consequence be what it may.

In fact, Vashti is the heroine of this play! After the king banishes her she disguises herself as Hatach, the king’s servant, and pushes the narrative to her will without anyone realizing it.

At the end, Vashti says:

Vashti as Hatach , the Scribe ( To king and queen .) —
I’ll write this in my annals of Esther’s reign and thine !
We’ll call it the “ M ‘gillah ; ” forever it shall shine
To rulers and to princes a plea for tolerance !
(Advances to front of stage )And to the house of Israel a great inheritance !
And unto me (muses and sighs) I own it, the time for woman’s right,
Among these barbarous Asians, it is not yet in sight.
But I have learned it lately , that ’mongst some Northern nation
In a far distant country has a new civilization
Arisen in its mighty power, and women there elated ,
Already to their hearts’ content the men have well berated .
I hear they there are doctors, and learned in law and lore .
One does command a ship , and some preach where they God adore.
The men tend quite submissively to duties of the houses :
They mind the babes, they cook and wash as well as their good spouses.
The government will shortly too by woman’s rule grow free !
They will fill all the offices ! That is the land for me!
The cause of Vashti lives triumphant, when I shall be no more,
Farewell, home of my birth ! I’ll go to that far distant shore,
And though my fate to history be lost fore’er and aye
Our sex will build me monuments ! I’m off, my friends ! good -bye !