Mohammed Aliyan, the father of terrorist Baha Aliyan, who murdered three Israelis in the east Talpiot neighborhood in Jerusalem in 2015, took part in a UN Human Rights Council meeting on Monday as part of a Palestinian delegation of families of dead terrorists and security prisoners.

In the assembly, Aliyan spoke of the “sufferance” his family has undergone since his son’s terrorist attack, due to the investigations and the sanctions imposed upon them by Israel. He also claimed Israel had executed his son.

Since his the terrorist attack, Aliyan Sr. has launched a campaign to glorify his son, and in the process he has become a symbol for Palestinians in general and in east Jerusalem in particular.

“I, the lawyer Muhammad Aliyan, am a defender of human rights, and representative of the Palestinian families who Israel is harming through collective punishment,” he said at the assembly.

On October 13, 2015, Baha Aliyan and his partner, Bilal Abu Ghanem, boarded bus number 78 in the Talpiot neighborhood in Jerusalem and opened fire at the passengers, stabbing several of them along the way. Three Israelis were killed in the attack: Haviv Haim,78, Alon Govberg, 51, and Richard Lakin, 76, and seven others were injured.

Yes, a person who explicitly supports his son murdering senior citizens on a bus is claiming to be a human rights defender.

And the UNHRC, of course, welcomes him. 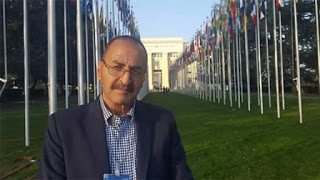