Palestinian activists and journalists on Monday launched a campaign to protest against Facebook after the social media giant removed dozens of pages in recent weeks, saying they incited and glorified terrorism.

“Facebook is waging war on the Palestinians,” the activists and journalists complained in a statement as they launched a Twitter hashtag entitled “#FBfightsPalestine” to protest the Facebook measures.

Get The Times of Israel’s Daily Edition by email and never miss our top stories FREE SIGN UP
According to the Palestinians, the Facebook crackdown intensified after the killing of Ahmed Jarrar, the Hamas terrorist who was part of a cell that killed Rabbi Raziel Shevach in the northern West Bank last month.

Israeli security forces killed Jarrar in a shootout on February 6 in the village of al Yamoun, near Jenin.

Since then, the Palestinians said, Facebook has temporarily suspended or permanently removed more than 50 private and public pages and posts, most of which were dedicated to glorifying Jarrar. One of the deleted pages belonged to the Jarrar clan in Jenin.

That’s interesting, because there are more Palestinian pages glorifying terrorists than there is time in the day to remove them.

Here is a post from Fatah earlier this week kicking off what will probably be a month long celebration of the anniversary of the Coastal Road Massacre. The poster shows all the Fatah members involved in the murders of some 38 Israelis, featuring Dalal Mughrabi.

And the poster is not about “martyrs” because two of the terrorists were not killed but captured. 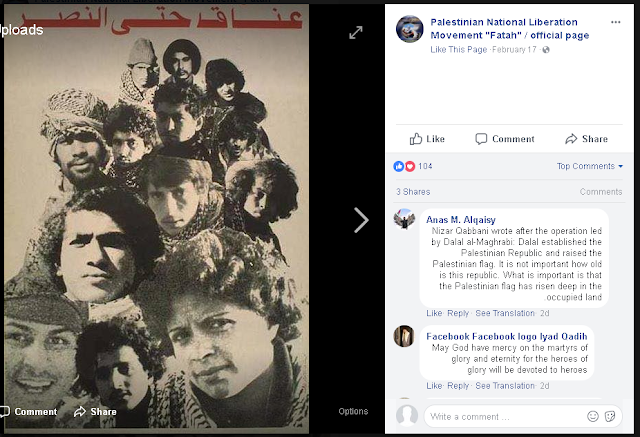 And Mahmoud Abbas, who pretends to be against violence, is the leader of Fatah.