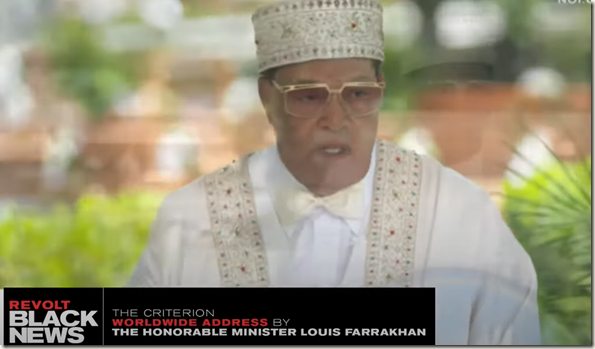 On the Fourth of July, music mogul Diddy hosted a heaviily-promoted speech by racist Louis Farrakhan on his “Revolt TV” YouTube channel.

Here are some of the things he said about Jews in this speech.

Farrakhan made up a story that in the Talmud, Jews have a tradition of poisoning people and if the victim survives the poison, then you are really from God. A Jewish woman poisoned Mohammad with poisoned meat and he survived, although he was weakened. Farrakhan then said that he too was poisoned with radioactive seeds that Jews placed within him to kill him, but he also survived although weaker. “If the Jews are saying that we did try to kill him and you know I’m alive then what should that tell you about who I am?”, he said to applause, comparing himself to Mohammed.

Speaking about ADL leader Jonathan Greenblatt, Farrakhan said, “Mr. Greenblatt, you are Satan. Those of you that say that you’re Jews, I will not even give you the honor of calling you a Jew. You’re not a Jew… you’re Satan and it’s my job now to pull the cover off of Satan. So every Muslim, when you see Satan pick up a stone as we do in Mecca.”

He went on a bizarre rant about Alan Dershowitz which sounds like a threat against all Jews: “So Mr. Dershowitz,  if you bring the vaccine and say you’re gonna bring your army to force us to take it, once you try to force us, that’s a declaration of war on all of us. You only have this one life; fight like hell to keep it and fight like hell to destroy those whose heart and mind is to destroy you and take your life from you.”

In this clip, Farrakhan says that Jews who believe in the Talmud (which is all Orthodox and most Conservative Jews, and even non-religious Jews quote it) are trying to kill him and if they succeed, it will mean they will all be destroyed:

How is this not incitement?

Here are a couple of clips where Farrakhan insisted he isn’t against Jews, but only against imposters – which conveniently happen to be pretty much every Jew.

Here’s just one of the half dozen antisemitic things Farrakhan said today with the support of @Diddy.

Calling me an “imposter Jew” that Allah must banish, equivalent to Satan, doesn’t make it any less Jew-hatred. Farrakhan defining who Jews are and aren’t is just more Jew-hate. pic.twitter.com/GckmeeaX0g

More of his hate where this antisemitic bigot claims to define most Jews as not really being Jews and deserving of being killed.
Gee, thanks, @Diddy for making me and millions of Jews targets for Farrakhan’s followers. pic.twitter.com/Yjcc6320E8

Everyone is so scared of calling out Farrakhan’s antisemitism because they don’t want to look like they are against black people. Yet excusing and coddling bigotry is what is insulting to black people – and every other human being.

If Jews are allowed to be insulted and demeaned in a speech promoted by the most respected and successful black person, then Diddy isn’t a fighter for justice – he is an enabler of bigotry.