Euronews covered the recent startling statistics showing how antisemitism has skyrocketed in France this year.

The video accompanying the report notes that the rise is mostly due to Muslim attackers.

(I haven’t see anyone blame Trump for this yet.)

Euronews chose two tweets to illustrate the article. The first one comes from StandWithUs and describes how armed guards are now necessary to protect Jewish schools, synagogues and community centers in Europe.

It is quite appropriate for the article.

But then it embedded a tweet by antisemitic cartoonist Carlos Latuff, praising a French graffiti artist for reproducing one of his cartoons where Jews supposedly label everything antisemitic when it is really “merely” anti-Israel. 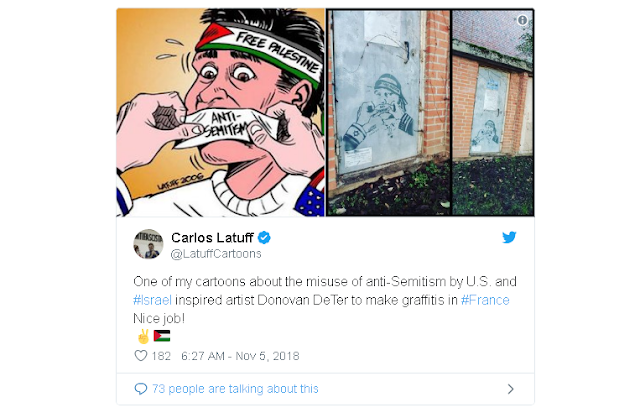 What the hell prompted you to illustrate this with a tweet by antisemitic artist Latuff?

He has compared Jews to Nazis many times in his artwork, and he was a runner up in Iran’s cartoon contest to lampoon the Holocaust.

There is no doubt that the attacks against Jews in France in recent years have nothing to do with Israel, yet you choose to push this disgusting artist’s tweet that praises graffiti in France that minimizes real antisemitic attacks as somehow being the Jews’ fault?